Echo chamber? Or seeing the world as one wants it to be?

I like receiving Bryce Edwards’ NZ Politics Daily newsletter. It’s a valuable digest of political issues seen through the filter of media coverage, including the blogosphere, and Bryce’s commentary is always worth a read. (Material from The Paepae features now and then too, which I also appreciate.)

Yesterday’s missive reflected the theme of the Thorndon Bubble/Beltway zeitgeist: ‘National is doomed!’, although Bryce’s coverage was, naturally, more muted. It’s fascinating to see the ebullience generated in some quarters (and grim stiffening of features in other quarters) by a smidgen of opinion poll movement. More about that another time.* Politics, like sport, can often come down to a gain or loss of momentum. 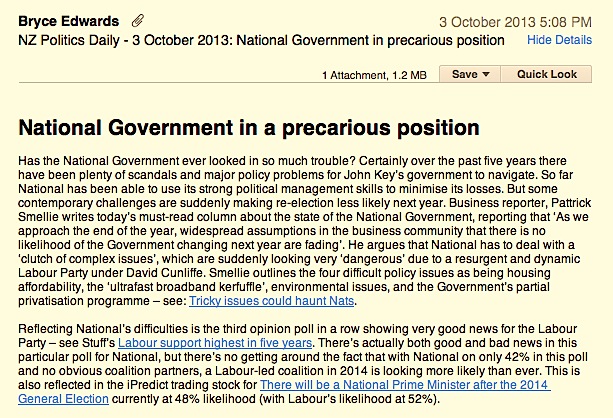 Personally, I think there’s a lot of water yet to flow under the bridge before the next election, but people — insiders and outside observers — are free to speculate and enthuse, as they will, until the cows come home.