Did Tame Iti *really* ‘pose a risk to the community’? 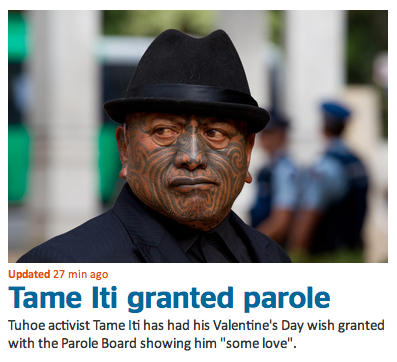 From the NZ Herald today:

Tuhoe activist Tame Iti … will be freed on bail in a little over a week’s time, having served nine months of a two-and-a-half year jail term.

He and Te Rangikaiwhiria Kemara were sentenced to two and half years in prison after being found guilty during a trial last year of six firearms charges and not guilty of four.

The Parole Board will release Iti from prison in a little over a week’s time.

A spokeswoman said the board was satisfied Iti no longer posed a risk to the community.

Iti will be subject to conditions but the board will not release those before the full decision is released in the next two days.

Questionable. Certainly, as others have noted, there was something implausible about the explanations offered for the Urewera bush camps.

Or do the Police & state security apparatus’s improperly-authorised and illegal spying tactics (even well-intentioned, as in this case) pose more of a risk?

The Government Communications Security Bureau (GCSB) is appealing against a High Court ruling that it needs to disclose evidence it gathered while it was spying on the internet mogul.

The involvement of the GCSB was exposed during a judicial review into the legality of a police search warrant on Dotcom’s Auckland home and the seizure of his assets – which were found to be illegal.

Dotcom was later cleared to pursue a case for damages against the police and the GCSB.

“We say Her Honour was wrong to order the extent of discovery in this case.”

The discovery would “raise issues”and cause delays to Dotcom’s extradition hearing, he said.