Dealing with something new in your environment

This very cool photo, taken through the periscope of a US Navy submarine which had surfaced through ice in Arctic Ocean, shows a polar bear — investigating something remarkable, novel and outside its previous experience. (Well, I assume it hadn’t encountered a nuclear submarine’s tail fin before, but I can’t be certain.) Thinks: What is this new thing I am dealing with? What do I do about it? 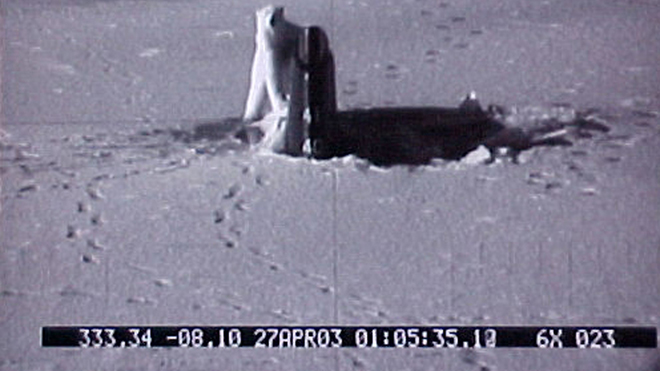 Apr. 27, 2003: A polar bear approaches the tail of the USS Connecticut, a Sea Wolf-class nuclear submarine, after it surfaced through ice in the Arctic Ocean. The photo was taken through the periscope of the submarine, which was on exercises in the Arctic. (AP PHOTO/U.S. NAVY) via Fox News – click

Questions like those the curious polar bear must have been asking — What *is* this new thing in my environment? How should I approach it? — remind me of a talk I heard at a new-age personal development workshop years ago which in essence said, When we’re born, we ask ourselves two questions: Who are these giants? and How do I need to behave to survive in their world? …

I’ve come to see that how we answer those questions — the conclusions we draw — can actually shape our personalities at a deep level, with effects far into our lives. A lot of psycho-analysis (and other forms of client-centred counselling) is, at root, trying to bring our submerged conclusions — and our internal ‘model’ for how the world works — to to the surface for examination. (Sometimes we have to crack through ice — see why the pic works?)

It can be very personally enabling and powerful when you ‘click’ to a realization that you act a certain way in certain situations because of a long-buried thought or conclusion. “So that’s why I react to […] that way! Wow.”

I know from my work that co-dependent conduct (yes, it’s a buzzword, but stay with me) sometimes really, really damaging behaviours and other addictions, can grow out of a wonky conclusion we reached at a young age. ‘Young and impressionable’ is a cliché, right? For a reason.

I won’t litter this post with trite examples. You know, you’ve see them in action. Girls who decide that the way to get mummmy/daddy to love them is to act precocious; boys who pull back from affection or bury their hurt feelings; or closing themselves down, having made a decision that showing feelings is unacceptable and ‘weak’. That last one has a high cost, literally shortening lives.

So, to my point (sorry if the preamble was too … ambling): Now and then, we are confronted with an experience which is totally new to us. It doesn’t fit with our previous ‘understandings’ of how things work. Whatever it is — a thing, a person, a series of events — it’s not comparable with our previous experience. It’s not easily categorisable by reference to things we have dealt with in the past.

When that happens, we can have a range of reactions. The most common is to try to force it into a category within our experience. (I call this the ‘Tastes like chicken’ response.) On a broader scale, some step towards a new experience, other step away.

Sometimes, a new ‘stimulus’ can be so far outside our current experience we can’t actually perceive it real time but can only recognise it (like some life lessons) by looking back. There’s a (probably apocryphal) story that when the first European explorers came to the Pacific, the locals couldn’t see the tall ships because such large sailing ships were beyond their experience. I call BS on that tale, but it makes my point.

So, the questions are: How open are you to new experiences? — How new?
What are you doing in your life to expand, rather than retract your mindset/esxperience/skill-set?

It doesn’t take genius to see that people whose lives fold in on themselves — whose experience and motion and friends and reading and entertainment and learning are confined or constrained to a smaller and smaller ‘box’ — age faster. Living in an ever-decreasing circle makes you old. (Reminds me of an old joke about vegetarianism: You don’t live longer, it just feels like it. Pfft!)

It’s ‘normal’ to seek a better life, to try engage in deeper and more meaningful relationships, and to aim to gain more ‘success’ (however you define it). Part of that journey, I’m convinced, is (cue theme from Star Trek) is to encounter new things … and where we can, to embrace them.

I remember my father telling me late in his life that he felt like his friends and the community in which he operated were “encrusted”, immovable, unchangeable. He had a full and long life, for sure, but told me he felt constrained by that aspect, their definition of him weighed on him. It was a conversation that stuck with me. (Actually, it’s one of the reasons I try to engage with people who disagree with me, and with whom I disagree — not for ‘the sake of argument’, but for the challenge it can offer to my thinking. As I have said before: My goal is to meet opposing views with a sanguine, ‘Ah good. We see things differently.’)