« What do you think?
Questions about the teapot investigation » 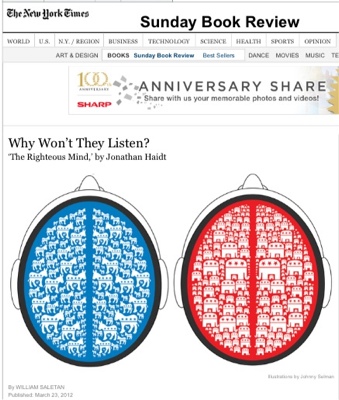 A wonderful book review in the NY Times ‘Why Won’t They Listen?’ sheds some light on the ‘my tribe is better than yours’ bias we discuss here from time to time.

Reviewing The Righteous Mind by Jonathan Haidt, William Saletan describes how we acquire preferences for social values (liberal v conservative) over time, based on our upbringing and environment.

We may attempt to write off other people’s values as bigoted and reactionary, but really, it’s worth taking a step back and trying to see the ‘good’ they’re based on. (‘Empathy’, as I keep harping on about, although the word doesn’t appear in Saletan’s review.) As he explains, a predisposition to espouse support for morality, authority, sanctity as values can start with a ‘taste’ as we’re brought up.

The worldviews Haidt discusses may differ from yours. They don’t start with the individual. They start with the group or the cosmic order. They exalt families, armies and communities. They assume that people should be treated differently according to social role or status — elders should be honored, subordinates should be protected. They suppress forms of self-expression that might weaken the social fabric. They assume interdependence, not autonomy. They prize order, not equality.

These moral systems aren’t ignorant or backward. Haidt argues that they’re common in history and across the globe because they fit human nature. He compares them to cuisines. We acquire morality the same way we acquire food preferences: we start with what we’re given. If it tastes good, we stick with it. If it doesn’t, we reject it. People accept God, authority and karma because these ideas suit their moral taste buds. Haidt points to research showing that people punish cheaters, accept many hierarchies and don’t support equal distribution of benefits when contributions are unequal.

You don’t have to go abroad to see these ideas. You can find them in the Republican Party. Social conservatives see welfare and feminism as threats to responsibility and family stability. The Tea Party hates redistribution because it interferes with letting people reap what they earn. Faith, patriotism, valor, chastity, law and order — these Republican themes touch all six moral foundations, whereas Democrats, in Haidt’s analysis, focus almost entirely on care and fighting oppression. This is Haidt’s startling message to the left: When it comes to morality, conservatives are more broad-minded than liberals. They serve a more varied diet.

OK, yeah, much as I don’t like being put in a monolithic pigeon hole (‘the left’) he has a point.

It’s more than that. We all (liberals and conservatives) each tend to defend our positions by arguing with an often quickly rendered cliché version of ‘the other side’. We look for, perceive and remember data which we interpret as ‘evidence’ (‘proof’ even) that our existing ideas and values are the ‘correct’ ones. It’s the problem with paradigms, in other words, as we have discussed here before.

I’ve always said no ‘side’ is better or worse than the other at getting off their point of view. We’re equally quick to judge each other as inferior. Haidt disagrees:

The hardest part, Haidt finds, is getting liberals to open their minds. Anecdotally, he reports that when he talks about authority, loyalty and sanctity, many people in the audience spurn these ideas as the seeds of racism, sexism and homophobia. And in a survey of 2,000 Americans, Haidt found that self-described liberals, especially those who called themselves “very liberal,” were worse at predicting the moral judgments of moderates and conservatives than moderates and conservatives were at predicting the moral judgments of liberals. Liberals don’t understand conservative values. And they can’t recognize this failing, because they’re so convinced of their rationality, open-mindedness and enlightenment.

Haidt isn’t just scolding liberals, however. He sees the left and right as yin and yang, each contributing insights to which the other should listen. In his view, for instance, liberals can teach conservatives to recognize and constrain predation by entrenched interests. Haidt believes in the power of reason, but the reasoning has to be interactive. It has to be other people’s reason engaging yours. We’re lousy at challenging our own beliefs, but we’re good at challenging each other’s. Haidt compares us to neurons in a giant brain, capable of “producing good reasoning as an emergent property of the social system.”

That, “We’re lousy at challenging our own beliefs, but we’re good at challenging each other’s” is a key statement. (Which is only to say it reinforces my already-held model of the world!)

In my experience, despite the [alleged] broadmindedness of conservatives, an attempted discussion about policy or morality, even a questioning of some assertions, can very quickly lead some personality types to retreat to their mental bunker, spewing.

I haven’t read Haidt’s book yet but I will.

In the meantime, read the illuminating review here at NY Times.