« A good conversation to watch about the changing role and mix of media
I loved him. But I’m biased. »

Bill Clinton’s still got the shine. Unlike some. 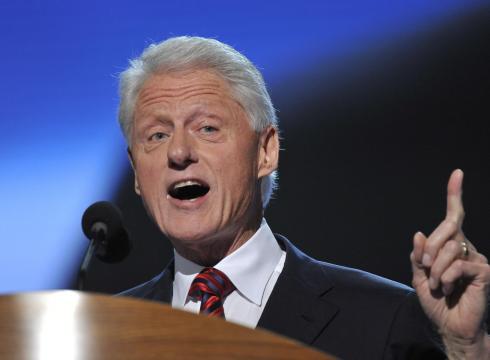 I’m too young to have observed at first hand the way the US media was [supposedly] swept up in a love affair with John F Kennedy. Sure, I’ve read contemporary accounts like LIFE magazine fawning over the Kennedys etc, and looked at the phenomenon historically, but that ain’t the same.

As an observer I was struck by Ronald Reagan’s polish and communication skills, at the time. But he left me cold. He seemed canned and scripted and I could never see the reason for the enthusiasm about him. Later it emerged that he had been a Democrat and a union boss (oh the horror!) who changed horses midstream and … well, the rest is history. Only someone with a defective moral compass (or Alzheimers?) could have justified and approved the Iran-Contra oil for arms deals clandestinely run by Oliver North. Those actions were, literally, criminal. 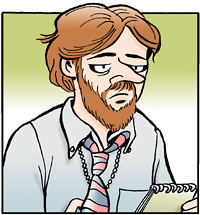 I did however observe the fulsome gushing which Bill Clinton provoked in elements of the media. Some reporters seemed to be in love and didn’t care who knew it. Others affected a faux ‘balance’ beautifully skewered by Garry Trudeau in a Doonesbury cartoon which placed intrepid reporter Rick Redfern on a campaign bus, writing a glowing report of the then candidate Clinton’s speech at an event and the enthusiastic reception it provoked.

As I remember the cartoon, after two or three frames of Rick (who was based on Bob Woodward apparently) pounding out glowing copy about the candidate, he pauses, stares into space and types: ‘Still, character issues persist…’
It was the best they could do to try to counter the charisma.

Clinton’s political skills, his apparent empathy (or real? how do I know?), his beguilingly simple but at times nonetheless inspirational ‘Let us come together’ oratory, were all undeniably attractive and effective. Something felt right about him. Clinton so badly outclassed George HW Bush and to many in the GOP he appeared to have ‘da media’ on his side, something Republicans seem to have bitterly remembered to this day, eight years of George W Bush notwithstanding, since they’re recycling the same whinge about Obama and treating the media with contempt and shameless lies a la Lyin’ Ryan.

Rumours about the younger Clinton’s er, appetites and’indiscretions’, rumoured-then-explicitly-revealed sex scandals (remember the obvious roll-out of Gennifer Flowers?) and concerns about his ‘lack of discipline’ took second place to his performance. He was jus’ so darn likeable. (I’m not saying he’s a saint, and we’ve discussed the Dick Morris sessions and influence. Enough said.)

So anyway, I wasn’t surprised at his tour de force at the Democrat Party convention yesterday. (Full speech on youtube via CSPAN) Quite a speech — as the NY Times analysis demonstrates. 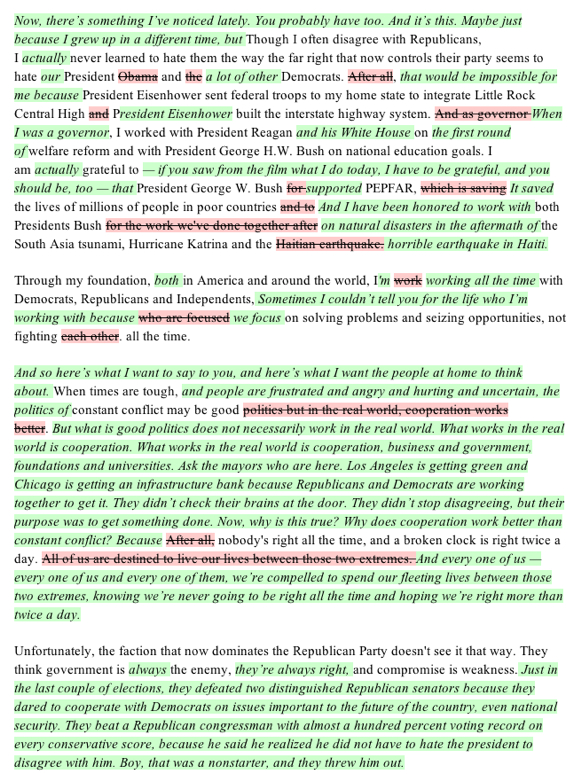 At the Atlantic Wire website you can read Clinton’s prepared speech notes marked up with the insertions, deletions and elaborations he ad-libbed. See: What Bill Clinton Wrote vs. What Bill Clinton Said I found it very interesting and impressive … a political master’s performance, using simple, plain language, including this:

“Though I often disagree with Republicans, I actually never learned to hate them the way the far right that now controls their party seems to hate our President and a lot of other Democrats.”

Yes. Politics can become partisan to the point of hateful sectarianism. Yuk. God knows we suffer that here.

As likeable as New Zealand’s current prime minister John Key is (or has been?) he’s not an orator. In fact, he’s currently being mocked, unfairly in my view, for his public speaking performance.

Speech impediment aside, John Key is a good communicator as I’ve said before. The more-successful-than-you-guy-next-door schtick is still working for him. But Mr Key’s own lack of discipline and occasional ill-considered remarks (e.g. words to the effect of: ‘We can always ignore the Waitangi Tribunal’s recommendation’) risk wearing out his welcome with the media and some of the public. Perhaps it’s a deliberate risk he’s willing to take for the sake of dog-whistling to his ‘base’. 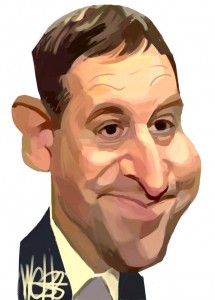 Remember Mr Key told the country he’s ‘not moaning’ nor ‘bent out of shape’ about the ‘aggressive, antagonistic and hostile media‘ he feels he faces now. (Obviously, raising the issue in those terms would inevitably be seen as a complaint, as a smart guy like him knows, so his obfuscation on that point failed.)

Indeed, according to some, the NZ media’s alienation process started in earnest in response to Mr Key’s double-talk and overwrought reaction to the John Banks Teapot tape affair. Remember him raising teen suicide and News Of The World? Pfft.

TV3’s political editor Duncan Garner described Mr Key as losing his shine through the debacle … and the historic-for-all-the-wrong-reasons impression of police taking orders from the Prime Minister then raiding Radio NZ and the Herald on Sunday offices and libelling, then persecuting a cameraman. (Oh, to be clear: it’s me, not Duncan after ‘debacle’ in that last sentence.)

Bill Clinton still has his shine.

Perhaps it will be the same for Mr Key.

UPDATE: Barack Obama’s ‘acceptance of the nomination’ speech was a knockout too. (But you’ll already know that if you care.)