The twisted tale of ‘Wellington sex trade entrepreneurs Michael and John Chow’ who want to locate a brothel across the road from Auckland’s landmark Sky Tower (!!) takes another turn. 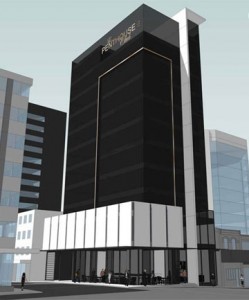 BIG plans for Auckland. No thanks, boys. (pic stuff.co.nz)

Developers Michael and John Chow are planning to build a 10-storey super-brothel on the prime inner-city site once occupied by the historic Palace Hotel.
The “entertainment and hospitality centre” will have underground parking, a restaurant and bars and a rooftop swimming pool, as well as a “gentlemen’s club”.
Following a deal with the publishers of Penthouse Magazine, two floors of the building will be occupied by a Penthouse Club – where adult performances by models will “bring the magazine to life”.
The Chow Group have secured the Australasian rights to operate Penthouse Clubs, and the new Auckland club would be the first in the Asia-Pacific region.
However, Auckland Council spokesman Glyn Walters said no consent applications had been received for the new building’s construction.
A $200,000 bill the council sent to the Chows for the demolition of the Palace Hotel, located opposite SkyCity Casino, remains unpaid.

Read this article at the NZ Herald and this for some of the background on the buy-a-historic-building-then-renovate-it-so-incompetently-that-the-Council-orders-its-demolition-for safety-and-bills-you-$200,000-for-doing-so-then-you-announce-bigger-better-plans-that-will-need-Council-consent saga.

A Wellington perspective from the Dominion Post includes this gem:

Co-director John Chow said: “It was sad to see it [The Palace Hotel] torn down, but the new development will be better than ever and the entire facility will provide a level of entertainment and hospitality to an international standard brand new to Auckland.”

Oh gee whiz. ‘Better than ever’. Wow. Just what we need.

Is anyone spotting a pattern here? (Or is it a winning formula?):

The Chow Group runs a Wellington brothel and strip club and owns other property in the city.
The Historic Places Trust is still considering whether to prosecute the group for failing to seek an archaeological authority before demolishing the former Settlement Restaurant in Wellington in January. The building was demolished to make way for a proposed 12-storey apartment block.

Something about this project reminds me of Saffron. Hmm, obviously these guys have already got good lawyers. What they need is a good sales team. Any suggestions?  {Cough, splutter}