‘Spin’ (bending reality), is not a phenomenon just confined to politics.

At the risk of being accused of ‘looking a gift horse in the mouth’, here’s a fine example:
Yesterday I saw this letter which looks like a kind gesture from the BNZ — telling ‘small business owners’ who are credit card merchants about the bank’s ‘support’ for them, and sharing news of a $125 ‘rebate’ … 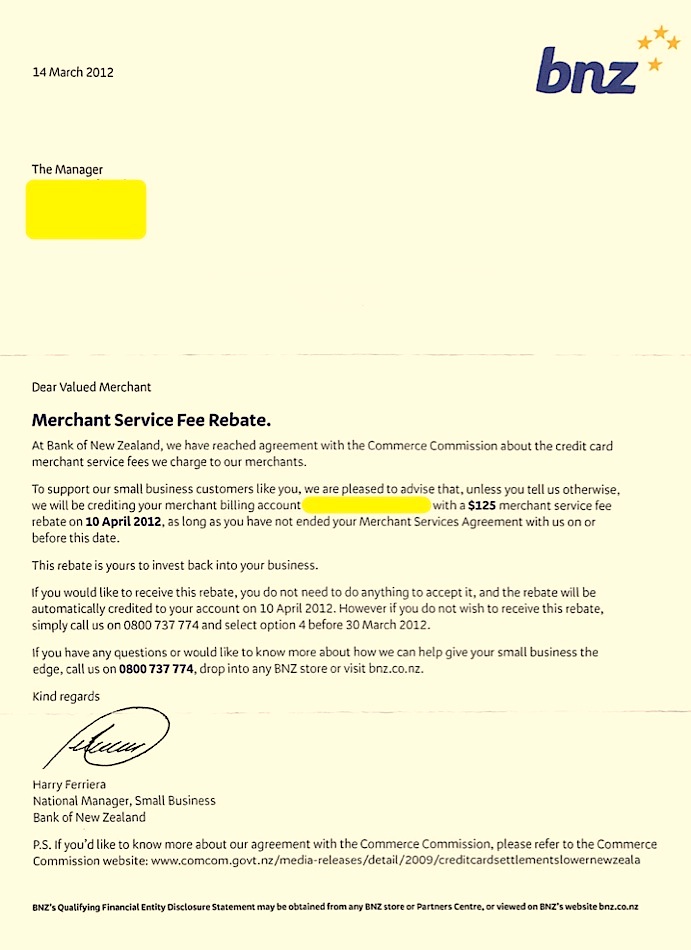 Wow, THANKS BNZ for giving us back some of the money you gouged from us when forced to by High Court action.

Best line: ‘This rebate is yours to invest back into your business.’
Translation: ‘Because it was your money that we over-charged you in the first place.’

‘Rebate’, BNZ? Riiiight. But, funny, when I read the October 2009 detail of the ‘agreement’ the BNZ has reached with the Commerce Commission referred to in the postscript, I see it was the result of High Court action against financial institutions … which seven settled: ANZ National, ASB, Westpac New Zealand Ltd, Bank of New Zealand, Kiwibank/New Zealand Post, TSB Bank, and The Warehouse Financial Services Limited.

The Commission claimed in High Court proceedings that the parties breached the Commerce Act by agreeing and implementing the Visa and MasterCard credit card scheme rules in New Zealand which, among other things, provided for the payment of multilateral interchange fees. The Commission alleged that these rules substantially lessened competition by artificially inflating the cost to retailers of accepting credit cards and ultimately raising prices paid by all consumers.

Thanks for the support BNZ.