Apple looks beyond Google for maps 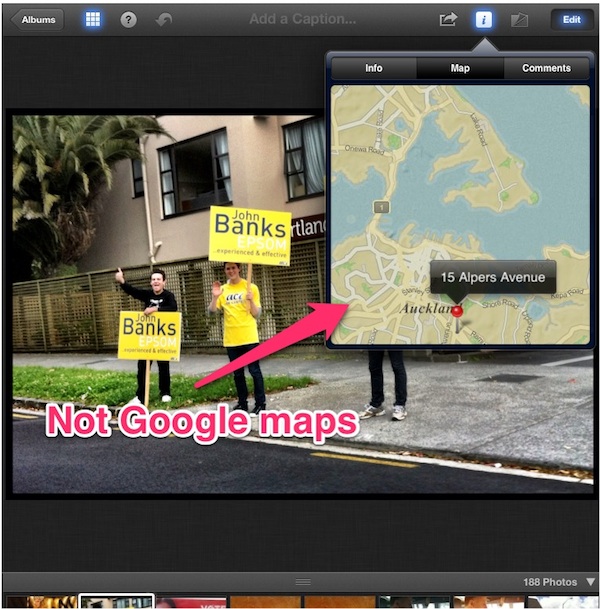 There’s commentary and discussion about the fact that Apples’ new iPhoto for iOS released this week utilizes mapping services that aren’t directly provided by, ahem, Google.

I remember watching a Tina Fey interview/appearance at the Google complex where she was jeered by the Google-ites for mentioning in response to a question that she used ” …an iPhone, and an iPad …”, leading Eric Schmidt to reprove his staff along the lines of: “Come on, people, we make lots of software for those products…”

The integration of Google maps, etc. on the original iPhone of course dates back to when Schmidt was on Apple’s board. (Industrial espionage, anyone?)

Interesting — but not surprising — that Apple is making a move now to loosen the collaboration. Privacy issues aside, lawsuits and patent disputes aside, it’s extraordinary how long the ‘frenemy’-ship has lasted.

Is web search next? I wonder.

As Geoff Duncan writing at Digital Trends points out, there’s a cost — and a strategy — behind ‘free’…

The price of free

It’s important to note that of all the major digital map-makers, only Google was offering access to its maps for free. Firms like Navteq and TeleNav recoup their investments by sell their mapping services to third parties — Navteq powers Garmin GPS units and Bing Maps, for example; TeleNav sells its own GPS and powers things like MyTouch Ford in-vehicle systems. Google, however, chose to zig instead of zag: It offered its digital mapping services for free to essentially anybody who wanted them. The idea was to make Google’s online mapping service a de facto standard for digital maps on the Web and in mobile devices. Once Google had established a serious presence in the digital mapping marketplace, it would figure out a way to monetize the service.