« A little geek humour … at the beach
The escape of exnzpat, Part 11 »

A space for discussion about psycho killer cats

A regular commenter here at ThePaepae.com, Ivan the Terrible, wants to discuss cats and the ‘sadistic psycho killers’ and ‘Cats to go’ national conversation Gareth Morgan is trying to float. OK.

Let’s start with Ivan’s opening comment, relocated from another thread …

“After crowing to others that “my cat never kills birds” – the little bumhole went and aced a dove out of a group that keeps hanging around my aviary hoovering up the pickings that fall out from my tame birds.

However – he didnt kill for fun – he ate the whole damn thing leaving only the feet and the beak. We do have tuis and bellbirds that are in the surrounding trees – he never bothers them and he does have a lot of noisy bling round his neck.

However – he does stalk and occasionally ace very tame blackbirds, thrushes and now doves (who i think must have escaped from an aviary and hence are too trusting)who get drawn in by the aviary birds etc.”

Well, yes. Yes, actually. Depending on the cat, I do. But they are killers — whether for ‘fun’ or just instinct, I don’t know.

I have a young cat, a neutered SPCA special my daughter picked out. The first I knew of it, we had a kitten (with stitches) and instructions to keep it inside for a couple of weeks. This is a photo of her asleep on my lap — judging by the frequency of that occurrence (her choice) that’s one of her preferred pastimes. And I quite like it too.

I find her a calming influence. She slows me down. (Except when she gets in a cat-fight in the middle of the night.)

This cat of mine does bring lizards and wetas and cicadas from the surrounding area into the house. She certainly does appear to ‘play’ with them, just as Gareth Morgan says. I ‘rescue’ as many lizards as I can from her and repatriate them to the garden.

She has also, judging by feathers, knocked off at least one small grey bird. I don’t know what it was, but its plumage was scattered underfoot on the landing at the top of our stairs.The tinkly bell on her collar does not seem to have inhibited her much. 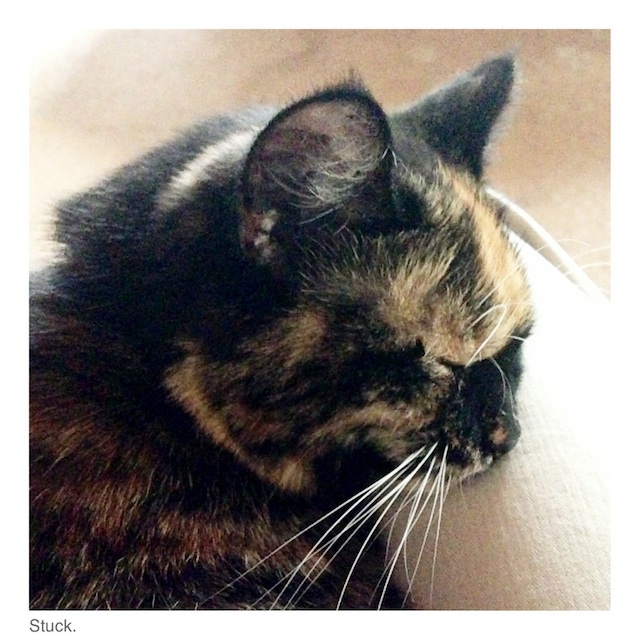 A pair of Myna birds, who I think must be nesting in part of my house’s roof, dive-bomb and angrily squawk at our cat — even through glass. She seems strangely attracted to them despite this, and addresses them in a funny, clicking language.

Another family up the road have two killer cats whom they lock in the house at night because they hunt as a team and have ‘mercilessly’ stalked and killed ‘lots’ of birds. Multiply that by a million and that’s pretty tough on birds. (On the other hand, there do seem to be a lot of birds around.)

Gareth Morgan might well be completely right about the scourge domestic cats wreak on native birdlife (not all victims are native of course) — perhaps cats in sheer numbers are worse in impact than weasels, opossums, rats and stoats, although that seems arguable.

But in my opinion he hasn’t got a show of convincing NZers to give up cat ownership.

PS Here’s a picture from this afternoon. This is my sister-in-law’s cat Gary. She (yes, she) made herself comfortable in a visitor’s bag, right on top of her clean clothing. So: is that entitlement or opportunism? 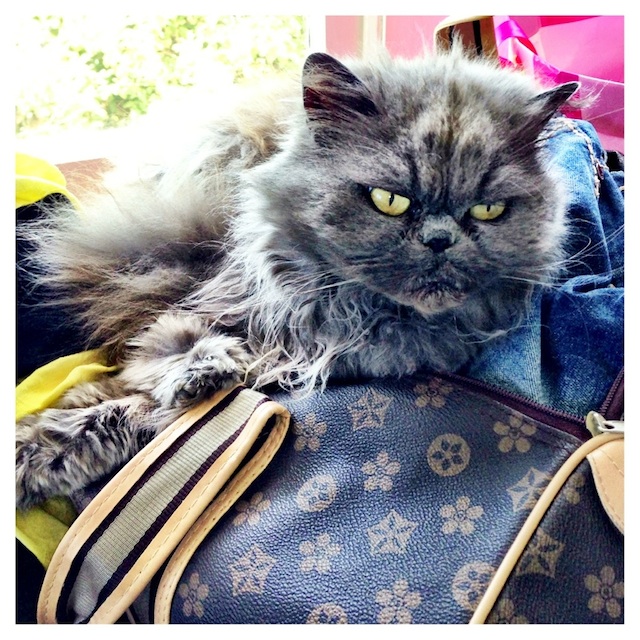