A new spin on ad-blockers and FAKE messages 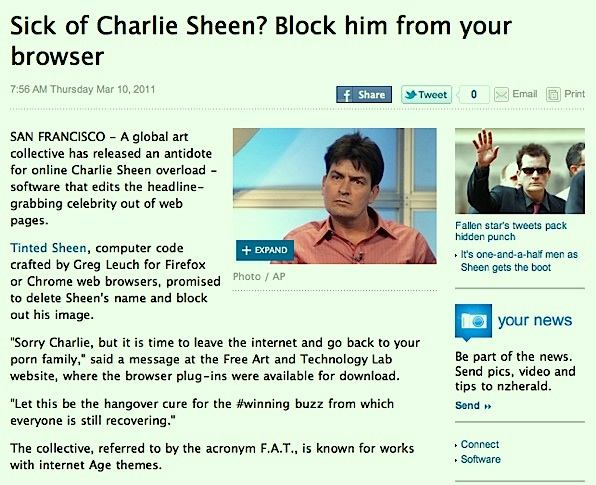 Read the full article (assuming you haven’t installed the plug-in) at NZHerald.co.nz

The other story about paid ‘endorsements’ by celebrities on Twitter contains these nauseating-but-probably-true passages:

Sheen took little more than a day to reach 1 million followers, a record. He had more than 2 million followers by yesterday.
All the attention has brought a huge amount of exposure to the business of social media advertising. Though companies have been working advertisements into Twitter and Facebook for more than two years, it’s a sometimes unnoticed practice.
“A lot of people know about the business now,” says ad.ly chief executive Arnie Gullov-Singh. “It’s a validation of the business that we’re building and the overall industry changes that we’re a part of.” [Comment: Bleurgh!]
…
[ad.ly’s] staff of 22 [ghostwriters] includes several who specialise in writing such tweets in the voice of the respective celebrity.
Gullov-Singh sees celebrities as “the driving force of social media“. “Brands want to get their arms around social media, and celebrities are social media,” he says. “So that’s where we set off to connect the dots and create value.” [Comment: Double Bleurgh!]