« Wishful thinking about MMP. From both sides of the debate.
Law Commission issues paper on new media »

‘YOU don’t say who or who isn’t a journalist’ 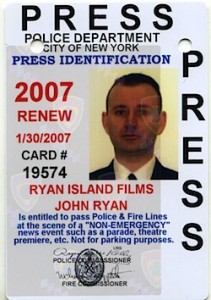 Here’s an article worth reading, which relates in a peripheral manner to our recent discussion about definitions of ‘news media’ vis-à-vis bloggers.

I Was Arrested at Occupy Bronx—for Writing About It

…While the four protesters left, I stayed behind to complain to Captain Garcia. His flank, as always, stood close. I made some good points but so did he. Unless I carried a press pass from the office of the Deputy Commissioner, Public Information—which I didn’t and which no officer had asked to see, either—then I’d be treated like a protester, he said.

“You don’t say who or who isn’t a journalist,” I said. He seemed to concede the point but also fell back on the policeman’s answer, “It’s the law.” Our “discourse”—his word, not mine—was over. I was way too angry anyway, both at being treated like a criminal and at myself for feeling afraid, to remain professional.  …

Carla Murphy’s article reminds me of some of my Wellington experiences.

I spotted this recently, and concurred in large part:

I still shun the term Blogging just as I shun the term Tweeting. It’s all just writing. It’s like trying to subdivide Novelist, Columnist, Blogger, Tweeter. Words are words. It’s not really interesting to keep slicing and dicing and sub-categorizing to me. I just write some stuff or share some stuff. Distinguishing between ‘Journalist’ and ‘Blogger’ is a waste of time. I’m all of those things and none of them.

The distinction I can’t let go of, for now, is the accountability for the accuracy of one’s words, if they can be seen to purport to be ‘factual’. Or if you claim, even implicitly, or by context, that what you say is ‘true‘. That’s what caught out self-proclaimed ‘investigative blogger’ Crystal Cox. It’s what catches out partisan attack bloggers.

As I said (whoop, whoop, self-quote alert!) in Storm the barricades, brothers and sisters!

I think the distinctions between ‘new media’ and whatever you want to call what existed before, are transitory. All-encompassing MEDIA will roll over and absorb it all. The divisions and barricades on which people in both ‘camps’ are spilling blood (metaphorically) will be a fly-spot on the wallpaper that is the history of civilization.