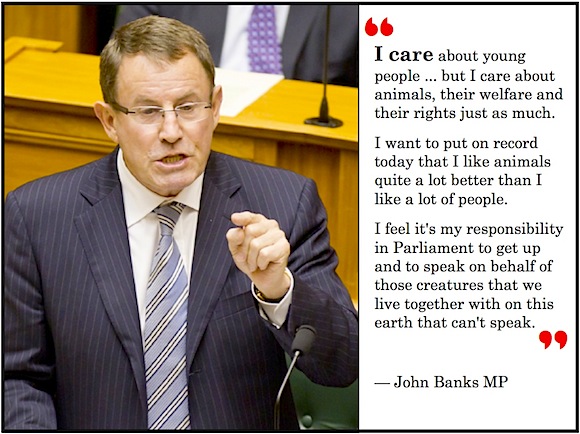 The ACT Party’s sole MP John Banks faced mockery and disrespect for his stand against animal testing in recent Parliamentary debate about amendments to the Psychoactive Substances Bill. Some people questioned his sanity or his social policy ‘priorities’. That’s a pretty harsh assessment, I thought when I heard it, but fair enough. Fair comment. A lot of people are suffering in our lingering economic recession. Not just the jobless.

I personally don’t agree with John Banks or ACT Party policy on a number of issues. (So what?) I also think the ‘free market’ ginger group is past its use-by date, on artificial life support, and it has been a hard-right trojan horse in John Key’s administration, e.g. Charter Schools. (But again, so what?)

At the last election ACT attracted a scant 1.1% of the vote — less than the polls predicted — and Mr Banks is only in Parliament (as a ‘Party leader’!) because of the deal struck with National in Epsom. Judging by ACT’s disintegration in the political opinion polls since the last election, not many other New Zealanders agree with their ‘recipe’ either. But that’s how democracy works — put up an idea or a point of view or ‘team’ … and see how it rates. See: ACT: ‘Zero backing. Zilch, nil, nothing at all.’

Anyway, John Banks is, in my experience, a person who compartmentalizes his thinking … and his life. He is, as we have discussed, somewhat of a split personality (see: Three faces of Eve … er, John Banks). He sometimes appears capable of massive, unselfconscious hypocrisy to observers not from his galaxy. e.g. speaking in favour of ‘cleaning up’ electoral laws within months of his own dubious ‘anonymous’ campaign donations scandal which has, no doubt, so degraded the ACT Party’s public reputation. Nail, meet coffin. 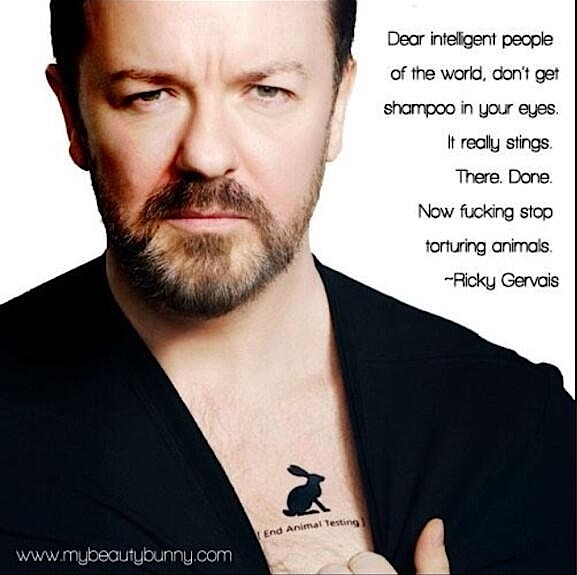 But on this animal testing issue I agree with him. And who could deny the clear veracity of his statement?: I believe John Banks undoubtedly, wholeheartedly likes animals ‘quite a lot better than a lot of people’. Just as he says.

John Banks is thick-skinned enough to take any heat for this, his latest Quixotic failed attempt to move an industry past its cruel and barbaric ‘traditional’ practices.

He’ll cope with his defeat, and relish the column inches.

And on this issue he’s in good company.