What is it about TVNZ Breakfast?

In the style of their sacked-in-disgrace old boy Paul Henry, now TVNZ Breakfast newsreader Peter McWilliams let his mouth cross to side of duuurr! — by referring to double Olympian and Badminton champion Mark Todd in these unflattering terms, according the NZ Herald. 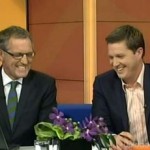 While commenting on Todd’s win in the Badminton Horse Trials, Williams said: “Some of Mark Todd’s personal habits frankly don’t lend to being … he’s had the odd fag over the years, hasn’t he?”
Co-newsreader Corin Dann, giggling, asked: “What did you just say?”
Williams replied: “Cigarette, I meant.”
TVNZ spokeswoman Megan Richards said the comment from Williams and any innuendo was accidental and not malicious.

“…not malicious”? Uh, OK. Is that on the basis of Hanlon’s razor, Megan Richards?:

“Never attribute to malice that which can be adequately explained by stupidity.”

Maybe there’s an undetected fault in the air-conditioning in the Breaklfast studio and they’re all suffering from a non-fatal but IQ-diminishing variant of Legionnaires’ disease. Or is there ‘something the water?’

Come on, Peter Williams. You can do better than this. – P