« James Cameron calls it as he sees it …
OK, so it’s not just priests who seek to cover sin… »

There’s something about a cover-up that offends us …

God told me to cover sin?

I always seek to “cover” another’s sin. I try and focus on the good in others and hide their faults. It is simply trying to obey several specific bible verses. …
Well I had one particular situation where I knew things that were not right and people were potentially being taken advantage of. I have over and over again had to stop myself from saying anything publicly and it has been incredibly hard for me. Every time I said to God that I wanted to see this thing put right HE would say to me “D**** it is your job to cover sin, justice is my problem”.

The head of the Catholic church in Ireland, Cardinal Sean Brady seemed stuck on defending his past inaction and cover up, reportedly justifying the failure of the church to unmask a serial child abuser in the priesthood in these terms:

Earlier Brady said it was the responsibility of his diocesan bishop, as well as the leader of Smyth’s separate Catholic order of priests, to tell police. But he said the church didn’t do this because of “a culture of silence about this, a culture of secrecy.”
“Yes, I knew that these were crimes,” Brady said. “But I did not feel that it was my responsibility to denounce the actions of Brendan Smyth to the police. Now I know with hindsight that I should have done more, but I thought at the time I was doing what I was required to do.”

A somewhat similar situation to to our “sin covering” friend above, don’t you think?

“This week a painful episode from my own past has come before me. I have listened to reaction from people to my role in events 35 years ago. I want to say to anyone who has been hurt by any failure on my part that I apologise to you with all my heart. I also apologise to all those who feel I have let them down. Looking back I am ashamed that I have not always upheld the values that I profess and believe in.”

Brady says ‘this week’ but for the victims it’s been a lifetime.

Where will the reluctance to face the sin and missteps of the past end?

Top Vatican officials — including the future Pope Benedict XVI — did not defrock a priest who molested as many as 200 deaf boys, even though several American bishops repeatedly warned them that failure to act on the matter could embarrass the church, according to church files newly unearthed as part of a lawsuit.

The internal correspondence from bishops in Wisconsin directly to Cardinal Joseph Ratzinger, the future pope, shows that while church officials tussled over whether the priest should be dismissed, their highest priority was protecting the church from scandal. 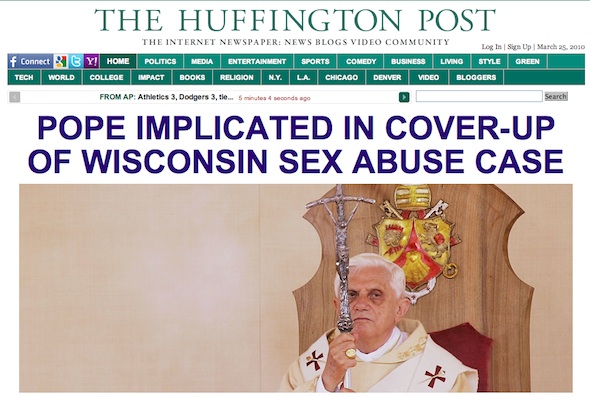 So “several American bishops repeatedly warned them” — Good step, but why didn’t they blow the whistle?
How much worse did it have to get?