« Watching paint dry with Steve Lambert
The measure of character »

A teacher of mine used to say: ‘The only person who knows how far is ‘too far’ is the person who goes too far.’ 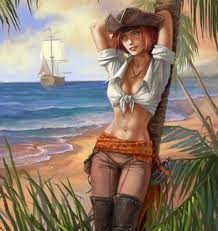 One of 28 million images that pop up in Google search for 'pirate' ... (pic: Joahim Van der Graff ...via Tech Crunch)

With respect, NO, sometimes it’s blindingly obvious for others to see. Such as The Huffington Post’s relentless ‘aggregation’ — ‘Driving traffic, Darling’, says Arianna Huffington justifying the activities of the largely parasitic enterprise bearing her [ex-Husband’s] name.

In my view, expressed here before, HuffPo cynically exploits other news organizations and writers by scraping their content and relentless (laughable once you twig to it) SEO-pimping. The decline in quality has been noticeable, and fighting that by pinching MORE stuff from others and token linking is weak sauce. See also:Plagiarism as a business model.

Here’s a post by online columnist Simon Dumenco writing at AdAge who objected to heavy-handed appropriation of his content and received an ‘apology’ with news that Huffington Post had ‘suspended indefinitely’ the underling writer who did it … ignoring the oh-so-obvious fact that she was merely doing as she had been shown to do in the culture of Huffington Post.

Bill Keller, the outgoing editor of The New York Times, knows sketchy aggregation when he sees it. In his column in the Times Magazine in March, he famously attacked certain aggregators for “taking words written by other people, packaging them on your own Web site and harvesting revenue that might otherwise be directed to the originators of the material. In Somalia this would be called piracy.” He then added, “The queen of aggregation is, of course, Arianna Huffington.” …

Worth a read. And so is his follow-up.

Thanks for the Apology, Huffington Post. Now Please Apologize to the Writer You Suspended

An Open Letter From Our Media Guy to Peter S. Goodman
By: Simon Dumenco

John Gruber’s comment On attribution and credit seems a good way forward to me.