« What is this @3NewsEditor? Pravda?
The right wing is ‘demanding its pound of Crazy’ »

But it was swallow-your-coffee-quickly funny to see Simon Lusk’s business associate, the irrelevant Cameron Slater, try to spin yet more proof that the National Party leadership regards Simon Lusk and himself as akin to political lepers as somehow A Good Thing … pfft! 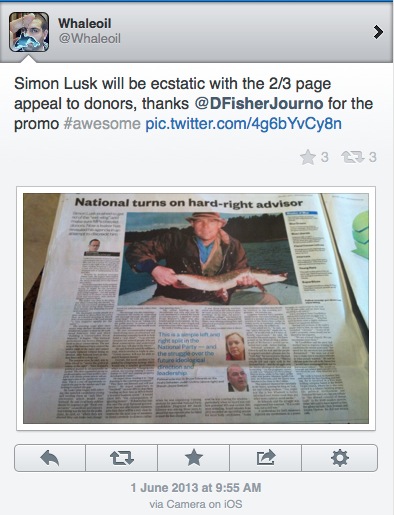 Cameron Slater trying to spin his and fellow self-described political operator Simon Lusk’s recent odium as a positive thing. Will some idiots be fooled? Dunno.

To be clear: I bear not a scintilla of animosity towards Mr Lusk. I did comment earlier …

… short of running foul of the Fair Trading Act or Advertising Standards Authority, Simon Lusk is perfectly entitled to promote himself as a campaign ‘wizard’ to credulous wannabe National candidates any way he likes.

And it seems to me some of Mr Lusk’s promotional puffery skates pretty close to the wind. e.g.:

“The right currently controls the blogosphere, and the political journalists repeat much of what appears on blogs.”

“Controls the blogosphere”? Yeah, right, Simon. Dream on. Some idiots will believe you.
But I guess that ‘s no worse than similarly slippery, hyperbolic and crappy TV infomercials promising exaggerated weight-loss, a more comfortable bra, an end to pimples and freckles, or to sell you ‘the only exercise machine you’ll ever need’.

The leaked ‘Lusk Papers’ are available here via Bryce Edwards.
Read them and observe the parallel universe he and his fellow ‘fiscal conservatives’ inhabit, wishing, oh, wishing really-really hard, that the NZ electorate was more like the USA — the finest democracy money can buy.

Watch Mr Lusk hawking for business using an allegation of dirty tricks (denied, as we have discussed, see: Of bloggers, dogs and fleas. The Ports of Auckland’s ‘ethical and legal breaches’, but still out there) … viz. the Ports of Auckland colluded with ‘certain bloggers’…

The case in point is the way the Maritime Union have received huge negative publicity about their salaries, based on POAL (Ports of Auckland Limited) working with certain bloggers to control the story. Financial support for these bloggers will enable them to build their credibility and readership.

On the topic of Mr Lusk’s mission to try to help ‘these bloggers’ build their ‘credibility’… well, I guess one works with the tools one has to hand.

Bad luck Simon. You are working with some real tools.

Here’s The Nation’s report from the weekend which I watched on Saturday morning. I have to say I admired John Key’s response, including his framing of the Lusk/Slater/god-knows-who-else faction as extreme or hard right. Mr Key also portrayed Simon Lusk himself as a small businessman ‘servicing’ anxious, unsure National Party newbies and wannabes with nudge-nudge, wink-wink ‘dark arts’ mumbo-jumbo:

Jiohn Key: So he’s [Simon Lusk] had quite a successful little business actually in providing those services to people, from what I can see. The party has responded to that by saying well look he’s filling a void, but actually it would be more logical for the party to fill that void itself. So we now have candidates’ colleges, we have training sessions, and we provide a lot of those services.

Considering Simon Lusk’s ‘magical thinking’ electoral campaign services reminds me of a joke about the car park attendant at the Singapore Drivers Licence testing centre who let it be known that for a fee (bribe) paid on the way in to the test he would arrange a PASS. Money-back guarantee.