Oh dear. Even someone with an ‘official’ Facebook page and thousands of followers apparently feels the need to have a sockpuppet … 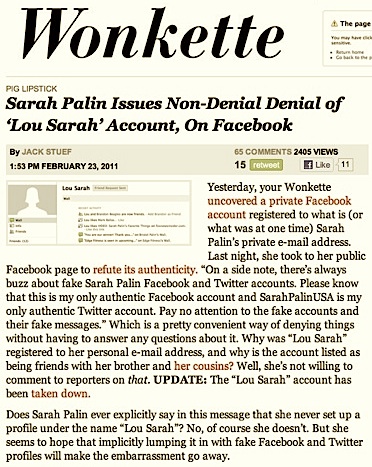 Read the story at Wonkette (click) ...if you care.

Yesterday, your Wonkette uncovered a private Facebook account registered to what is (or what was at one time) Sarah Palin’s private e-mail address. Last night, she took to her public Facebook page to refute its authenticity.

Which is a pretty convenient way of denying things without having to answer any questions about it. Why was “Lou Sarah” registered to her personal e-mail address, and why is the account listed as being friends with her brother and her cousins? Well, she’s not willing to comment to reporters on that. UPDATE: The “Lou Sarah” account has been taken down.

Now, look, it might just be that this was a semi-dormant FB page set up when Sarah Palin was less famous. [UPDATE: Nope, set up last year, apparently.]

But the fact/assertion that the page was [allegedly] “created for the sole purpose of ‘liking’ the actual Sarah Palin’s Facebook leavings”, if true, makes me vomit and speaks of the sort of devious sock-puppetry some of those I criticise have practised …

e.g. popping up pretending to be innocent bystanders/customers of my business appalled at my online ‘behaviour’ in calling out spruikers by name in a discussion forum (Slapper) or pretending to be their own ‘satisfied customer’ speaking up to defend the deceitful spruiker (i.e themselves) from criticism (Muffit). Or the fake person who popped up to defend Shaun Stenning and publicise his [alleged] large donations to charity and how he’s changed people’s lives with ‘the information and strategies that he has taught from stage’ (Jennifer).

In concert this is called astro-turfing (i.e. fake grass roots — a clever name, I think) … when done by individuals as in these examples, it’s just lying IMHO.

Help me see the reasonable side of what they’re doing with this fake voice.