Well, the mediagasm was right. He’s outta there … Too bad.

“Rahm Emanuel, Barack Obama’s White House Chief of Staff, was given a dead Asian carp as a farewell gift from colleagues before the former presidential aide resigned in order to run for mayor in his home town Chicago.”
— Telegraph.co.uk 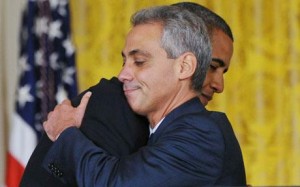 “The mantra in the West Wing is that no one who works for the president is irreplaceable. And yet that’s how they describe Emanuel, a whirling force of ideas and energy with expertise in foreign policy, political campaigns, communications and the legislative process. Obama’s aides talk of an unquestioned loss.”
— Huffington Post

This, which we chuckled about in my post in April, is even more meaningful now…

But Daley said he hasn’t offered Emanuel any advice about a mayoral run. “I don’t give any advice, I don’t give people advice. I don’t advise people, I’m not an adviser.“