« NY Times: Dealing With Assange and the Secrets He Spilled
Speaking what seems to be true re CNN & Tea Party Express »

I mentioned in a comment the news that Rahm Emanuel’s bid for his ‘dream job’ of Mayor of Chicago had hit a snag. Of course the split decision by the Appellate Court to boot him off the ballot for the election is being appealed. (Who wouldn’t?) 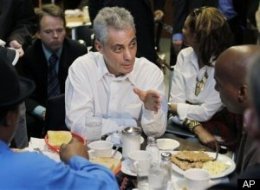 But now, it appears the narrative is undergoing a transformation. From Emanuel as well-monied (some say ‘outsider’) frontrunner … to Emanuel the oppressed underdog fighting the fight for democracy and the people of Chicago’s right to ‘decide‘ who’ll be their mayor.

As Albert Huber, ‘Follower of Chicago politics’ writes in the Huffington Post:

Voices in the op-ed pages have moved him from the frontrunner to the heroic and oppressed warrior. Now he is just a man who wants to give the people their right to vote but is being blocked by those pesky courts. He gets to carry the sword of Democracy against America’s favorite branch of government to scapegoat. This explains why one of the most pro-big business, largest money candidates was able to get 200 people to brave the bitter cold, hold signs, and chant slogans in an act that is usually reserved for underdogs.

But now Emanuel gets to be exactly that, the underdog, and everybody loves an underdog. No matter which way the Supreme Court rules, the Appellate Court’s decision will be good for Emanuel’s public image. If they rule against him, he will be a martyr for democracy put on the cross of judicial politics. If they rule in his favor, he will enter the election in February having fought through a fire of bureaucratic technicalities and a system that was against him only to emerge victorious. What’s more Chicago than that?

Nice — especially the description of ‘those pesky courts’.

Of course his political opponents and other detractors simply point to the question: Does he fulfil the statutory requirements to qualify to be a candidate? Which is a good question that demands a good answer. ‘Intent’ is so rubbery.
+
UPDATE:

In what’s been called ‘a scorching smack-down of the appellate court‘ the Illinois Supreme Court voted 7-0 to reverse the disqualification of Emanuel on residency grounds. From the judgement:

Although adopting a previously unheard-of test for residency that would have applied to all future municipal elections, the court made no attempt to explain what its standard means. The only hint given by the appellate court is that, whatever its standard means, this candidate did not satisfy it. The appellate court never explained what it meant by “actually reside” or “actually live.” Indeed, as its discussion of section 3.1-10-5(d) reflects, the entire appellate court opinion can be read as nothing more than an extended exercise in question begging, in which the appellate court sets forth the question to be answered as what it means to “reside” (No. 1-11-0033, slip op. at 11), and concludes that it means to have “actually resided”

Full story with links to judgement at Huffington Post