I’m going to come out and say it: I like what I know of Rahm Emanual and I wish him well.

I like him for all sorts of intangiable reasons but mainly because of his role in getting Obama elected; and his crucial (not too strong a word) support in getting the Obama health care reforms implemented in the US. When some in the media were lining him up for the drop — a scapegoat for why the reforms would not be implemented —  he stayed outwardly calm and worked to get them through. He brought those reforms back from the dead.

I also like him because Obama likes him and roasted him with such affection in 2005. Yeah. (See video below the fold.)

It was out there that Rahm Emanuel had said he wanted, someday, to run for mayor of Chicago. I’d heard that before. So when Mayor Daley announced he wasn’t going to stand again, I wondered… but not too much. Unlike some whirling dervishes in the US media. 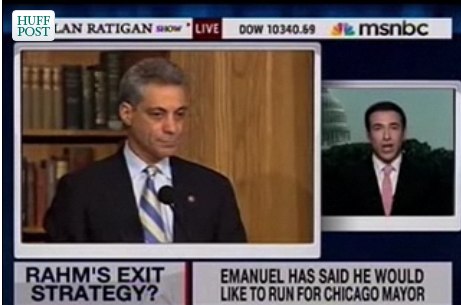 Look at this nicely-captured FRENZY on cable: (video below the fold — prefixed by not a bad ad for HSBC)

Hilarious. And vacuous. Thanks to The Huffington Post’s Ben Craw and Jeremy Binckes.