« Bradley Manning – out of place in the US army?
Dick Quax heir apparent no more »

Moral courage and standing in scorn, part 2 (in love)

WordPress honcho Matt Mullenweg tipped me to a neat article by Jonathan Franzen.

What seems like a long time ago, but was only July 2009, in the early days of this blog, I wrote a post  Moral courage — being willing to stand in scorn:

So, in the end, each one of us has to find our own moral centre – the place inside us from which our hunger or thirst for the better, the noble things lies. It’s this very same moral centre which drives our outrage, our determination to ‘improve the lot of others’ and to ‘strike out against injustice’ as Bobby Kennedy said.

Heroic language – like those words of the Kennedys – reverberates and motivates us not because of the fine words (although they are), or because they appeal to some heroic journey ‘archetype’, but for this reason:

Expressions of moral truth resonate with the truth that already lies within us. Sometimes, finding our courage is just a matter of getting attuned to that voice within ourselves, and letting it speak through us. Often that means stepping out of our own way, dealing with our fear, and being willing to bear the disapproval, opposition and scorn and of others.

I meant it then and I mean it now. Life’s issues aren’t going to be solved by being slippery and two-faced and telling people what you think they want to hear, nor by shying away from confrontation or truth-telling. 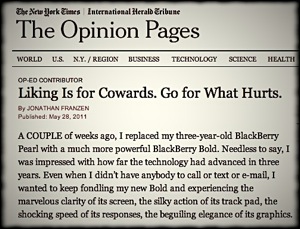 Today I read a wonderful article in the NY Times by Jonathan Franzen: Liking is for cowards. Go for What  Hurts.

If you consider this in human terms, and you imagine a person defined by a desperation to be liked, what do you see? You see a person without integrity, without a center. In more pathological cases, you see a narcissist — a person who can’t tolerate the tarnishing of his or her self-image that not being liked represents, and who therefore either withdraws from human contact or goes to extreme, integrity-sacrificing lengths to be likable.

If you dedicate your existence to being likable, however, and if you adopt whatever cool persona is necessary to make it happen, it suggests that you’ve despaired of being loved for who you really are. And if you succeed in manipulating other people into liking you, it will be hard not to feel, at some level, contempt for those people, because they’ve fallen for your shtick. You may find yourself becoming depressed, or alcoholic, or, if you’re Donald Trump, running for president (and then quitting).

His whole article is a peach. He speaks my language  … and he even uses my word of the year in a context which I really relate to — personal relationships:

The simple fact of the matter is that trying to be perfectly likable is incompatible with loving relationships. Sooner or later, for example, you’re going to find yourself in a hideous, screaming fight, and you’ll hear coming out of your mouth things that you yourself don’t like at all, things that shatter your self-image as a fair, kind, cool, attractive, in-control, funny, likable person. Something realer than likability has come out in you, and suddenly you’re having an actual life.

Suddenly there’s a real choice to be made, not a fake consumer choice between a BlackBerry and an iPhone, but a question: Do I love this person? And, for the other person, does this person love me?

This is not to say that love is only about fighting. Love is about bottomless empathy, born out of the heart’s revelation that another person is every bit as real as you are. And this is why love, as I understand it, is always specific. Trying to love all of humanity may be a worthy endeavor, but, in a funny way, it keeps the focus on the self, on the self’s own moral or spiritual well-being. Whereas, to love a specific person, and to identify with his or her struggles and joys as if they were your own, you have to surrender some of your self.

The big risk here, of course, is rejection. We can all handle being disliked now and then, because there’s such an infinitely big pool of potential likers. But to expose your whole self, not just the likable surface, and to have it rejected, can be catastrophically painful. The prospect of pain generally, the pain of loss, of breakup, of death, is what makes it so tempting to avoid love and stay safely in the world of liking.

Oh, look, seriously, go a read Franzen. It’s gold. ‘Bottomless empathy’ … but a willingness to tolerate not being liked, and telling your truth, despite the risk. Wow. That’s how it is y’all.

Tell me what you think. – P