« If you can keep your head …
Insulting people in print »

Is undisclosed, paid PR the new normal in politics?

It’ll be no surprise to readers of ThePaepae.com that I despise behind-the-scenes, subterfuge public relations and opinion shifting efforts, especially if they’re funded in a non-transparent way.

By coincidence, if you examine the tags dirty PR and dirty politics on this blog, the same cast of characters keeps on appearing. Over time that can make me appear… a bit fixated, I admit. But in reality, it’s just that I have an attention span, I’m interested, and these roosters just keep coming up. So I just run with it.

Here’s how Mediawatch reported an episode of dirty PR yesterday… Turning up the noise on an unlikely ‘teal deal’. You can read host Colin Peacock’s article there at Radio NZ and listen to the 11 minute segment, or the whole Mediawatch episode. I subscribe to the podcast, which is always good.

Like the Mediawatch crew, I saw this interchange on Twitter: the revelation by NZ Listener political writer Jane Clifton that people were being paid to shop the idea of a National-Green coalition, as unlikely as it was… 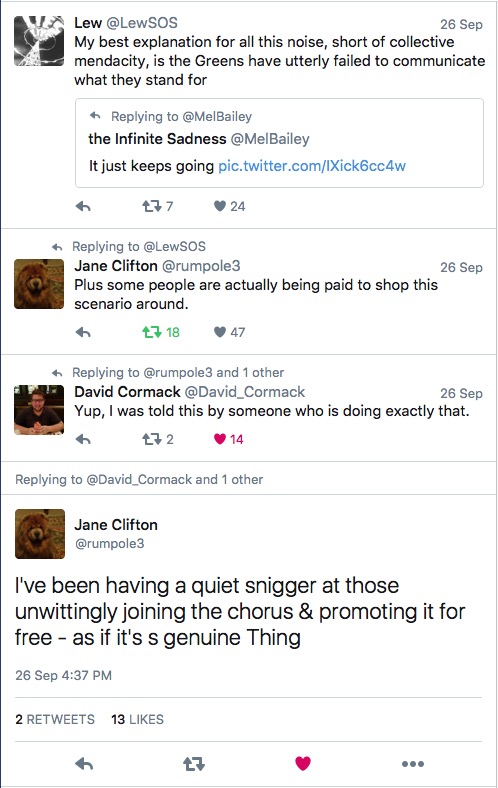 “…some people are actually being paid to shop this scenario around.”Jane Clifton spills the beans (click to see her tweet in context)

As Mediawatch reported, vastly experienced political reporter Richard Harman also observed the campaign, and described it as having ‘sinister overtones’… and oops, look who he says was ‘at the forefront’. David Farrar and Matthew Hooton. What a coincidence.

‘The dubious campaign to woo the Greens’ – Richard Harman at Politik.co.nz (click to read)

Wouldn’t you like to know who was paying for this PR campaign? I would too. But for some reason telling us is not seen as a priority for savvy political reporters.

Rob Hosking, writing for the National Business Review, described in vague terms how ‘some people are being paid to spruik the idea of a Teal Deal’, without, crucially, telling us who. 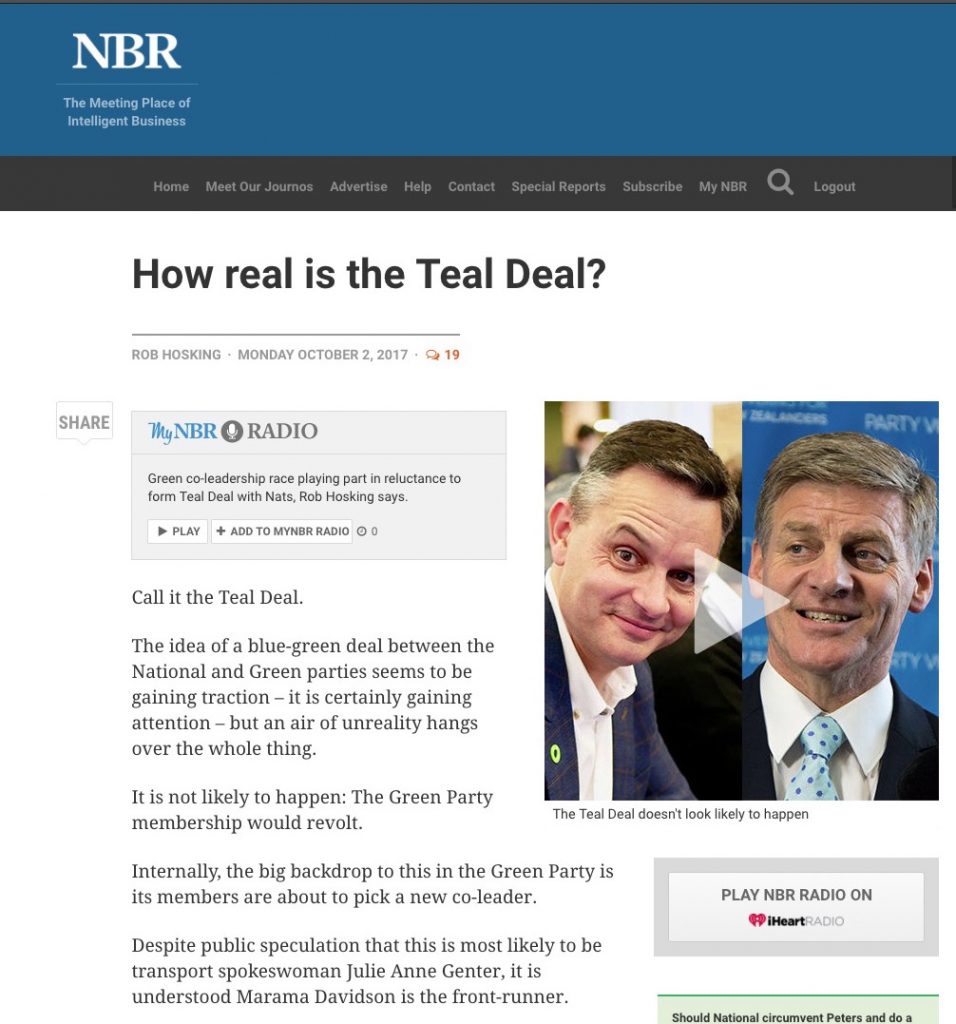 As usual, it is being put down to “dirty politics” – which, for a growing mind-set of left-wing activists, simply means any political tactic they do not like and have no real answer to.
There are also grizzles that some people are being paid to spruik the idea of a Teal Deal.
Firstly, what National is doing here is hardly dirty – although it does strain the credulity of all but the most gullible.
It is basic negotiating.
On the second point: People are quite likely being paid to shop the idea but so what? People get paid to shop around pretty much every idea in politics, from trade unionists to business lobby groups.
And it’s hardly an argument against the idea.

In his Mediawatch interview, Rob Hosking explained how he never actually talked to anyone “who was pushing it” and explained (ultra-vaguely) how he picked up the idea just by what was being said.
Also, delightfully, Rob explained his ‘The Sex Pistols rule’ (No-one is innocent) before actually, really, I’m not kidding, floating the idea that to disclose the PR progenitors or campaigners would somehow be akin to not protecting sources. (I’m serious. Listen below for yourself.)

Rob Hosking tells RNZ Mediawatch how “the line does get blurry” with PR and politics. Too bad. MP3 file

Frankly, as much I as like and appreciate what Rob Hosking does, I found it awful to hear his equivocation about this. ‘People get paid to shop around pretty much every idea in politics’, he said. But should journalists collude like this? ‘Source protection’ for paid PR flacks running campaigns with undisclosed paymasters for undeclared agendas?

This strangely tolerant, symbiotic relationship with PR — complete with We’re-all-adults-here-let’s-not-bother-the-readers-with-a view-of-how-the-news-sausage-is-made attitude — is not how I see the role of the Fourth Estate. What happened to ‘Without Fear or Favour’?

Rather, I’m with Richard Harman who described it as ‘sinister’. Or Jane Clifton who chortles at it, but calls it out in her way. For the National Business Review to more or less describe it as business as usual in these terms seems disappointing.

To effectively normalise the subterranean dirty PR of Hooton and Farrar et al – to ‘protect’ it – makes a news outlet sound compromised to me, and actually seem less trustworthy, notwithstanding that some excellent people (including Rob Hosking) whose work I respect, work at the NBR.