Here’s what that got me thinking … some new posters for some classic movies including this: 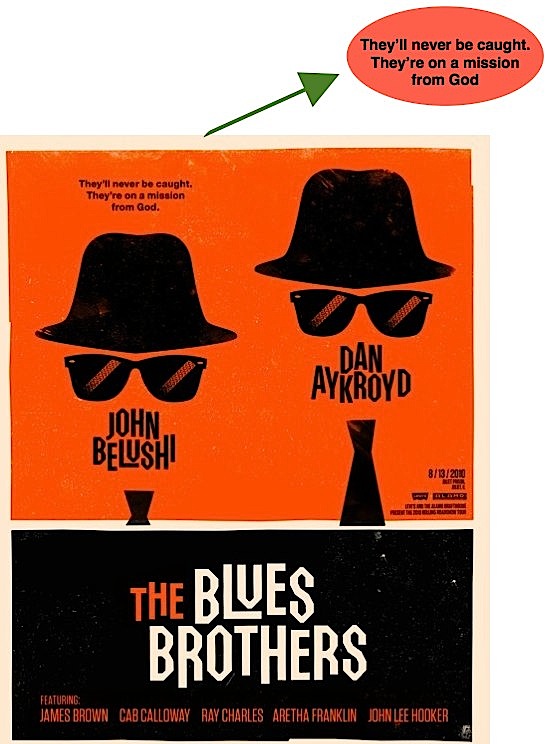 "They'll never be caught. They're on a mission from God." Hmmm. Image: Olly Moss (click)

During the first and second World Wars, both (all) sides told themselves they had God on their side. The Armed Forces had padrés and priests in place, performing their pastoral duties and administering their religious services and last rites etc.

In many countries after the wars, including ours, War Memorials of all shapes and sizes were erected to mark the catastrophic loss of life inflicted by the fighting. (And rightly so.)

Much of the language of these memorials reflected a belief that the sacrifice was partly for God, as typified in this extract from the Manawatu Herald 28 April 1920 reproduced at History of the Foxton War Memorial: 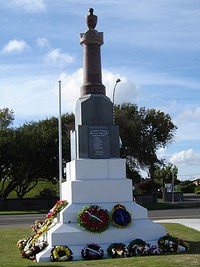 Above these New Zealand granite bases is the monument in Red Scotch granite, a circular and very highly polished piece of stone in three pieces. The bottom base has four panels, on which are inscribed, in bold letters, four mottoes: North side, “For Freedom’s Cause.” East side, “Greater Love hath no Man.” South side, “For God, King and Country.” West side, “Their Duty Nobly Done.”

On the main circular shaft are four panels, and the inscription, “To perpetuate the memory of the following, who gave their lives for God, King and Country in the great war 1914-1918,” inscribed on the East panel, then follow the names of the men who made the supreme sacrifice, divided between the north and south panels. The surmounting cap is finished with four gables and is traced with a design in each gable. The completed monument will stand 18 feet above the ground surface, and has a very handsome appearance, and will show to great advantage facing down the Main Street.

I have no dispute with — nor do I harbour any disrespect for — the sacrifice, nor the urge to memorialize the fallen solders, as I said on Anzac Day. That is right. It is fitting.

It’s the ‘gave their lives for God‘ part that causes me to reflect. Isn’t that a movable feast? And won’t there be similar memorials in the former ‘enemy’ countries? Germany? Italy? Austria? Japan? And don’t we suppose many of those grieving families after the war consoled themselves with the thought that young Johnny or Hans, Guido or Akido sacrificed their life ‘in the service of God’? Tricky, huh?

Religion is so entwined in our social fabric and warfare as we discussed in The overblown role of religion in conflict. It’s like a tinted window that colours the view of everything without being noticed.

Mujahidin — Holy warriors?
The clichéd ‘Muslim radicals’, the Taleban, Hezbollah etc and suicide bombers ALL say their actions are inspired by God. Overtly claiming to be ‘God’s warriors’ as they carry out atrocities. Consider Bosnia. Religious rites are ‘celebrated’ over fallen soldiers from whatever quarter. That can’t be an indicator of God’s partisanship.

For someone raised in a ‘Christian’ country, the emergence of Muslim Mujahidin on one’s consciousness takes a serious adjustment. Many of us are so steeped in the Christian way, like fish in water, with the belief that ‘everyone else is going to hell’ that being confronted with extremism and religious zealotry takes a bit of getting used to.

Of course, in the same way that an argument doesn’t gain any credibility just because it’s SHOUTED, a religious conviction gains no more ‘truth’ just because it is accompanied by a hijacking, a massacre or a suicide bomb.

But it seems plain that outside our cloistered Judeo-Christian existence (and I’m NOT knocking it) there’s a big world of religious beliefs … and it seems pretty arrogant to suggest they’re all ‘deceived’. Doesn’t it? – P

PS: Likewise, history has shown us, surely, (and we’ve discussed it here) that someone’s trumpeting of their religious convictions is no indicator of the veracity of their claims or the truthfulness of their nature. Surely only the gullible would accept that someone who publicly claims religious beliefs is somehow more ‘moral’, ‘ethical’ or ‘truthful’ than someone who doesn’t (…make such public claims)?