Getting to know your ‘targets’ 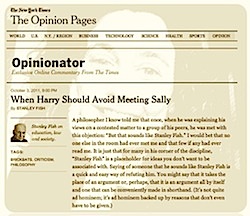 It's easy for people to say they "don't like you", based on your writing. (Who, me?) And sometimes it seems best to leave those shallow judgements undisturbed.

Via Andrew Sullivan, via Cameron Slater over the weekend, this interesting New York Times essay by Stanley Fish on how public ‘enmity’ can be a precious thing, and ‘meeting your opponents’ puts you at a terrible risk of ending up liking those you criticize. Good writing.

But how could Habermas ever be taken away from me? Even if he were no longer publishing, I could always have recourse to his previous writings whenever I needed to signal a negative judgment; I could still say (dismissively), “sounds like Habermas” and leave it at that. So no matter what he does or doesn’t do, he’s still mine. The only thing that might take him away from me is meeting him, something I was threatened with a few years ago in Chicago, but something I avoided like the plague.

Why? Because were I ever to meet him, the odds are that I would like him (the public record suggests that he is an admirable fellow) and if I liked him it would be hard for me to continue beating up on him. (Despite the proverb, familiarity does not breed contempt.) In fact I would immediately regret, and want to take back, all the nasty things I had said with such zest.

We’ve discussed the socialisation of the elite before — how fire-breathing radicals can be toned down (colonised?) by their experience interacting with, and sometimes cooperating with their ‘opponents’. Getting to know them and understand their reasoning … and values. It’s the same with those we encounter through their writing — especially online.

Sometimes we may hold a caricature image of those with whom we disagree. Upon meeting them however, we see that, dammit, they aren’t horned devils, and may in some cases actually possess reasonable-sounding motivations and justifications for their positions, statements and points of view … although we may still disagree. For that reason, I frequently try to meet (engage with) those whom I criticize.

I remember an instructive difference of opinion I had with Bill Birch when he was Minister responsible for ACC and I a humble press gallery reporter. Birch had announced an intention to cut ACC levies for employers because of an unexpected surplus in the ACC reserves. I said something like: “But that’s a great opportunity for ACC to invest that surplus and have a near to guaranteed funding pool for future claims.” He replied (paraphrasing him): “But it’s not ACC’s money. It’s been taken from the employers and self-employed and farmers … and that’s who we, National, are in Parliament to represent.” So, as I remember it, the ACC levies were cut; contributions didn’t cover outgoings … until the ‘surplus’ was all gone.

Birch saw his role as representing his particular constituents (National voters), and their interests. Even though I disagreed with him about the ‘best’ way to do that, and lamented the lost opportunity for ACC to have a funding buffer, by talking with him and seeing where he was coming from, I could see his side of the argument. (For the purposes of this discussion, let’s leave my shallow analysis of the philosophy driving Birch at that, OK?)

On Stanley Fish’s point about the ‘risk’ of meeting your opponents, yeah, sometimes it’s like that. One ends up toning down criticisms, or pulling punches, because of an emerging sense of understanding, even rapport with the ‘target’. (Does that make you ‘compromised’? Maybe.) Sometimes, someone’s repeated hateful/idiotic statements leave you in no doubt without a meeting being necessary. But will you take the risk?

Other times you come away with your prejudices confirmed, even amplified. You realize you’re dealing with a genuine, through-and-through, bonafide, died-in-the-wool [fill in the blank]. As Mr Fish says:

… it might be the case that the person you have learned to dislike in print is even more dislikable in the flesh (oh happy day!), but you can’t count on that and so it is better, all things considered, not to take any chances.