Does ANYONE doubt that this guy’s rights have been infringed?

From the BBC today: 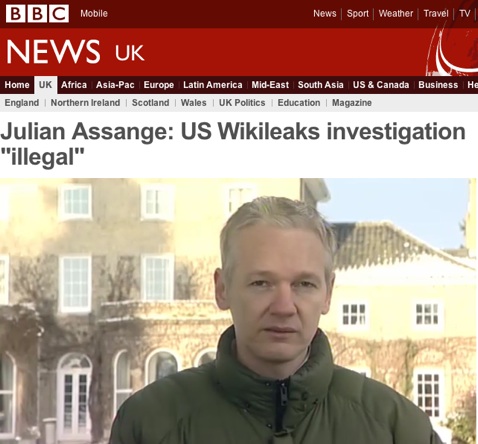 'A Swedish prosecutor has said that she didn't need to produce 'a single shred of evidence' to justify its execution of a warrant for Assange's arrest and hearings which ended up 'putting me in solitary confinement for 10 days.' - Julian Assange

Julian Assange has told reporters that the US investigation into his Wikileaks organisation was “aggressive” and “illegal”.

He went on to say that over 85% of his organisation’s economic resources are spent fighting “technical, legal and political attacks”.

Mr Assange was speaking to reporters outside the Suffolk mansion of supporter Vaughan Smith. He is under house arrest while awaiting extradition proceedings by a Swedish prosecutor where he is facing sex allegations.

Call me naive, but I hadn’t thought of the phrase ‘decapitation attacks’.

People like to present WikiLeaks as just me and my backpack. It’s not true. We’re a large organisation. The permanent staff is relatively small. In Cable-gate we had about 20 full-time staff. But it is resilient. It is designed to withstand decapitation attacks, and our publishing rate actually increased over the time that I was in solitary confinement.

And also, very interesting, The Salty Droid (who I had reason to think about recently in relation to the Internet ninja cowboys apparently trying to mess with us) has quite a different take on Julian Assange: SaltyDroid vs. WikiLeaks
… saying, among other things, Assange has ‘Rasputin eyes’ … and pointing to “the magical power of self-proclamation“. Fair comment.