« Does ANYONE doubt that this guy’s rights have been infringed?
I think I would die … »

An insane order of priorities …

Once again, Jon Stewart uses his platform — on Comedy Central (!!) — to sound a call for reason and justice and fair treatment. 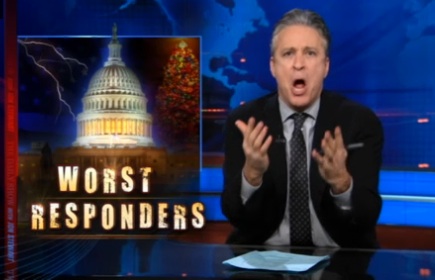 Watch as he castigates the Republican senators (and their mealy-mouthed supporters) for filibustering on the 9/11 First Responders’ medical benefits bill while whistling ‘tax cuts for the rich’ through an easy passage.

The bill would provide $7 billion in benefits for those who first responded on 9/11 and are now experiencing subsequent health problems such as cancer and respiratory disease. While it passed the House, Republicans have blocked the bill from advancing in the Senate. — Huffington Post

Then, in the second clip, he brings the voices of those affected to the screen … so good. So terrible.

Videos below the fold …