As part of this settlement, you agree not to tell the truth … 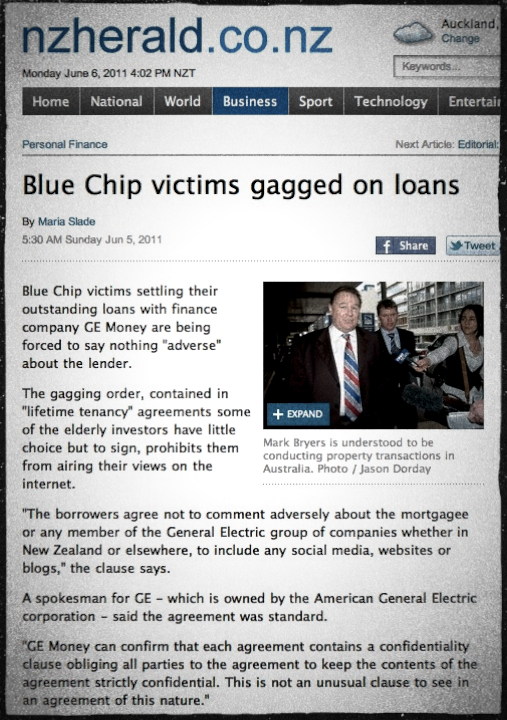 It's legal, it's 'standard', but is it morally right?

This clause, apparently an excerpt from a settlement between the borrower-victims of a mortgage issued by GE as part of the Blue Chip scandal, reminds me of something …

“The borrowers agree not to comment adversely about the mortgagee or any member of the General Electric group of companies whether in New Zealand or elsewhere, to include any social media, websites or blogs.” — GE clause, quoted by NZ Herald’s Maria Slade.

Don’t you admire (not exactly the right word) the slippery way a ‘confidentiality‘ clause becomes a non-disparagement clause? (Just like Shaun Stenning’s bush lawyer BS: … including but not limited to internet blogs …).

Yeah, uh-huh, thanks. That wasn’t the question. There is, despite what looks like a thin-to-the-point-of-transparent argument otherwise, a big difference between
(1) being bound to keep details ‘confidential’ and
(2) being prohibited from ‘comment[ing] adversely’.
A big difference.

“This is not an unusual clause to see in an agreement…” they say. No, of course not, especially if the stronger party makes it a condition of the agreement. What choice do bankrupt or near-bankrupt pensioners have? What if the GE mortgage terms are absolute rubbish? They can’t say anything?

The Golden Rule in action: He who has the gold makes the rules.

For the record, I think it’s good that GE have said they won’t turn their mortgagors out into the street. (Hello Westpac.) That approach is, comparatively, enlightened — and no doubt partly a result of the pressure of publicity. So why the non-disparagement agreement? Aren’t their customers, even the distressed ones, free to share their direct experience of GE Money’s products and service? They’re not serfs.