« What am is what I am. Are you what you are, or what?
Distribute comment spam. Get pinged. Ask that YOUR OWN SPAM be removed. Hahahaha! »

Reviving memories of Edie Brickell got me thinking about her, how happy she seemed, and how she seemed to disappear after marrying Paul Simon.

Here’s a line from a Jan 2011 AP interview ‘Edie Brickell releases records full of joy‘ talking about how her long-awaited 2011 CDs, the eponymous “Edie Brickell” and “The Gaddabouts”. Both had been in the works for a decade and both were received as “joyous“, each with a really positive vibe, despite some tragedy occurring in her circle of concern.

[…] Was that positive vibe by design?

Brickell: It’s just an evolution of spirit and consciousness, I think. In my late 20s, I thought, “Wow, things are fine for me. Why do I write sad songs? Why am I melancholy?” And I realized that I had emotional habits from my youth. … I think you get stuck in those emotional habits. If you don’t express a lot of joy early on, I don’t think you know how to later. [emphasis added]

Wow. That idea about getting stuck in emotional habits strikes me as worth letting in — and contemplating. (As in asking: ‘How do I do that?’)

It resonates with me, given also what we’ve been discussing here, in parts: Disengaging from destructive, hurtful situations and actions that perpetuate conflict.

Someone I love popped this up on her Facebook wall recently and I saw it tonight: 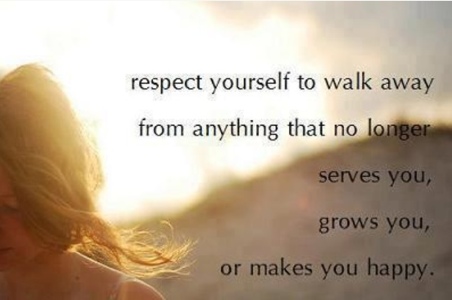 Nice. I would have written ‘respect yourself enough to …’ But still nice.