Uncertainty vs certainty. Growing out of old beliefs. 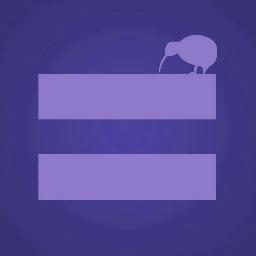 “Doubt is uncomfortable, certainty is ridiculous.”
— attributed to Voltaire

It can be useful and enlightening now and then to try seeing the world (or an issue, at least) from someone else’s point of view — a bit like taking a car for the proverbial “spin ’round the block to see how she handles”.

And combined with that realisation, should be this one: “There are things I used to believe, that I don’t believe anymore.”

I spotted this wonderful chart in a book review by the priceless and wonderful Maria Popova of Brainpickings.org.
Take  a moment to peruse it … 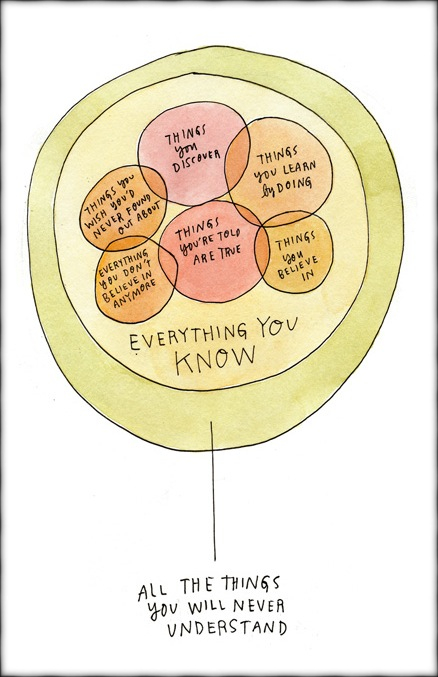 Image from ‘Lost Cat: A True Story of Love, Desperation, and GPS Technology’ by Caroline Paul, illustrated by Wendy MacNaughton. (click for link to review by Maria Popova)

It’s like that y’all. (Especially the ‘things you wish you’d never found out about’.)

Why do so many of us (me included, wretch that I am) resist the idea that we might have to change our minds about some Big Things — even our values or worldview.

I got to thinkin’ about that earlier this week after a commenter here asked me to reveal my “chosen belief system and how does it manifest itself?” To which I would say (1) How long have you got? and (2) At this moment, you mean?

That’s really a conversation to be had in person, I think, over a beer, or walking along a beach. But I did say this:

I’m not a believer. But I’ve had some experiences in the ‘spiritual’ realm that it is honestly easier to explain using the language of that world than it is to come up with another ‘rational’ explanation. I allow possibilities and certainly don’t prescribe other people’s beliefs.

My experience leads me to think that as we grow, our knowledge and beliefs change, reflecting our inward journey (if you’ll pardon the cliché).

I honestly think that stasis — in this instance meaning standing still in a cosy-but-deluded equilibrium, feeling we can stop thinking about things because we have ‘worked it all out’ — is deadly.

Like children, we try to make sense of things and realise, sometimes haltingly, that our efforts to explain ‘the universe’ or ‘politics’ or ‘society’ or ‘love’ consistently show themselves to be … incomplete. Whatever our theories, they don’t offer the certainty and reliability we’d hoped, or in some cases, that we’d been ‘sold’ by those doing the proselytising.

Just as the diagram above allows, there are things we are told are true, some of which we ‘believe in’ for a while, before eventually discarding that belief … even if that creates uncertainty.

We can respond to that uncertainty in several ways. One of those responses I see in ‘religious’ contexts is to cling for comfort to a calcified system of dogma and beliefs, repeating the catechisms, chanting statements of faith — but hollowly, without belief. ‘Lip service’. I found I could never do that, but if that’s you, fair enough. Take comfort there if you wish. But please: live and let live.

I also notice a tendency for some pilgrims to ‘return home’ or others to make a late-life conversion to traditional religious membership (‘traditional’ as opposed to fundamentalist). It seems to me as if they seek consolation in the structured liturgy, the forms of the religious community. Don’t get me wrong: I’m all for experiencing a sense of community and society. Grab it where you can, short of Manson family-types or brain-washing cults, and contribute. Support one another. Yes.

But it bothers me when people — especially fundamentalist religious types — try to use their own system of organised religious beliefs, and their numbers, to seek to constrain the freedoms of others where no ‘harm’ is being done. Viz. Same-sex marriage, in my view.

I’ve talked before about one of my heroes, Peter McWilliams who, it turned out, was gay, as if that matters. (It never did to me.) His book ‘Ain’t Nobody’s Business If You Do — The Absurdity of Consensual Crimes in our Free Country’ was, he said, built on this ‘single idea’:

This book is about a single idea — consenting adults should not be put in jail unless they physically harm the person or property of a nonconsenting other.

I allow there is such a thing as ‘community standards’ where someone’s actions have an impact less than ‘physical harm’ on others. As a father I can empathize with those seeking to ‘preserve’ something, to protect their kids from ‘moral harm’ or exposure in public to sexual material, especially when such exposure is for commercial gain.

But same-sex marriage? Not an issue. I support allowing loving people to declare their commitment to each other. I decry discrimination against people who are, for all intents and purposes, already spouses but aren’t recognised as ‘next of kin’ because the law hasn’t kept up.

As individuals and as a society, we have to grow out of the old beliefs — things we were told were true, the dogma of the past. We have to stop paying lip service to a set of religious ‘beliefs’ that we’ve outgrown and the detritus of which that we’ve already largely expelled from our laws.

We have to admit the truth of what’s real, what’s in front of us — and support what’s fair and just for our fellow citizens today. It’s not about being ‘liberal’ or ‘conservative’.