« NOT a funny hoax
How to be News Reporter » 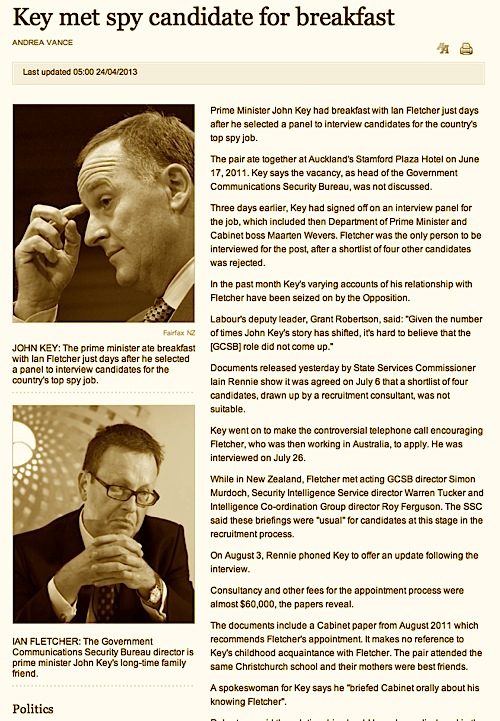 I remember writing a post before the last General Election, Hansard can be a real bitch, eh Mr Key? wherein I sympathised with noticed the difficulty some politicians seem to have remembering what they themselves said and how awkward that can be for them when they’re questioned about it in any detail.

Prime Minister John Key had breakfast with Ian Fletcher just days after he selected a panel to interview candidates for the country’s top spy job.
The pair ate together at Auckland’s Stamford Plaza Hotel on June 17, 2011. Key says the vacancy, as head of the Government Communications Security Bureau, was not discussed.
Three days earlier, Key had signed off on an interview panel for the job, which included then Department of Prime Minister and Cabinet boss Maarten Wevers. Fletcher was the only person to be interviewed for the post, after a shortlist of four other candidates was rejected. …

… The documents include a Cabinet paper from August 2011 which recommends Fletcher’s appointment. It makes no reference to Key’s childhood acquaintance with Fletcher. The pair attended the same Christchurch school and their mothers were best friends.
A spokeswoman for Key says he “briefed Cabinet orally about his knowing Fletcher”.
Robertson said the relationship should have been disclosed in the Cabinet paper.
“He also fails to mention that he called Ian Fletcher. It is a continuation of his economy with the truth when it comes to this appointment process,” he said.
Key has played down his links to Fletcher, saying they did not have contact for a number of years. …

Here’s how the NZ Herald reported Opposition spokesman Grant Robertson taking the PM at his word … see No mention of Key recommendation in papers on GCSB appointment:

“His appointment was made by the state services commissioner.” – John Key, March 27.

“There were no more than a handful of interactions, in total, between Key and Fletcher between the mid-2000s and the time of Fletcher’s appointment at the GCSB.” – Key’s April 2 written answer to questions from The Dominion Post, which also confirmed he made the phone call to Fletcher.

“I’d forgotten that at that particular time.” – Key on April 3 as to why he had not disclosed the call earlier. He also admitted: “I know his number.”

“I genuinely have no clue. I do not know how I got the number.” – Key tells Parliament on April 16.

He then followed that with: “I did not, at that point, have Ian Fletcher’s mobile phone number. To the best of my knowledge, I actually rang the directory service to get the Queensland number. I do not actually have his number.”

“I have once attended a dinner … at which Fletcher was one of several people present … at the residence of the British High Commissioner on October 3, 2011 … during my time as prime minister I have twice had breakfast with Fletcher before he became director of the GCSB. This happened on March 12, 2010, at the Hyatt Regency in Auckland, and June 17, 2011, at the Stamford in Auckland.” – Key, April 23.

“He recalls the prime minister telling him at a meeting in 2009 that he knew Fletcher … the commissioner was discussing his general approach to the recruitment of chief executives. The commissioner’s recollection is that the prime minister advised him that he knew Fletcher from school in Christchurch, and that he had met Fletcher infrequently since then.” – Statement from State Services Commissioner Iain Rennie, April 23.

The corrosion of Mr Key’s credibility over this issue seems to have no end and it must be like a thousand cuts. What can he and his spin doctors do to put it behind them? Dunno. Certainly portraying the Opposition as ‘Stalinist’, North Korean-style economic vandals and saboteurs isn’t cutting it so far.