You may have heard there were protest rallies around New Zealand today, demonstrating public opposition to John Key’s proposed expansion of surveillance powers of the GCSB.

I went along to the Auckland one. It was packed.

Here’s a panorama I took of the crowd at Aotea Square (it’s two photos stitched).

For me, one of the most powerful speakers was Professor Jane Kelsey. She may be small in stature but boy, she packs a punch. 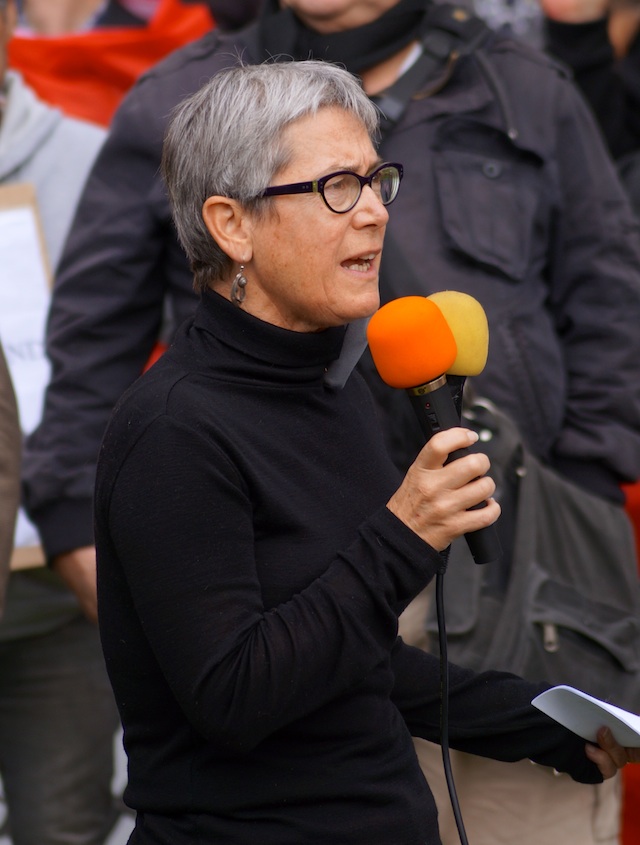 Professor Kelsey made the point (also highlighted by others who made submissions on the bill) that a provision in the proposed law would give the GCSB the power to spy on New Zealanders who were suspected of acting against ‘the economic well-being of NZ’ — well, that’s a movable feast if ever there was one! There’s a law written by a businessman rather than a lawyer. Wow.

She is a gutsy, intelligent person. I admire her courage. It’s spine-tingling to consider who might be subject to surveillance under such a law.

Then there’s the whole ‘mass surveillance’ aspect — the spy agency scooping up and storing your data & metadata in case sometime in the future the authorities may wish to look back and examine it … perhaps linking you to a real ‘baddie’.

These are disturbing developments.

Lastly, let me say that Peter Dunne, the independent MP who has said he will support Mr Key’s bill to pass into law (by one vote) was vilified today. It was striking how vehement the criticism and opprobrium directed at him was. His assurances that he’s negotiated ‘significant’ changes to the bill, that soothed his concerns, were scoffed at as cynical political expediency, delusional or corrupt.

Peter will never live down his foolish reference to ‘Where there’s a willing buyer and a willing seller, you can do a deal’. Ghastly.