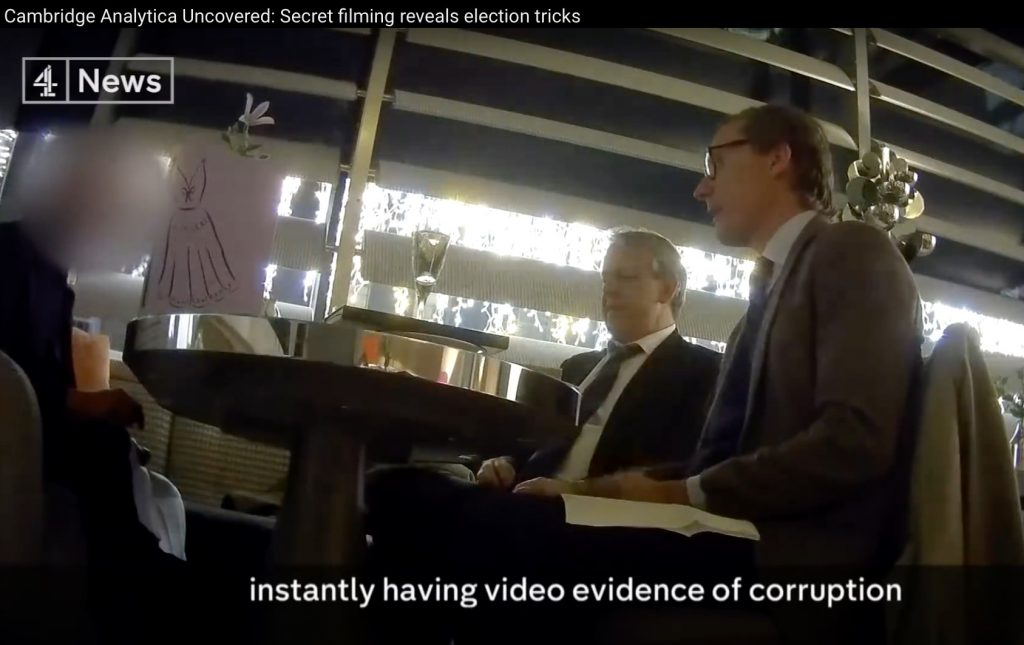 Cambridge Analytica’s Mark Turnbull, the managing director of CA Political Global and CEO Alexander Nix filmed in a hidden camera sting, in which Nix was secretly recorded describing in detail how his operatives have operated hidden camera stings.

Good god. This is devastating. And, at another level, deeply ironic.

Watch below. 19 minutes of your time well-spent.

And to think we used to regard Crosby Textor as ratbags, huh? Just goes to show.

This exposé also puts into context our local wannabe political activists highlighted in Nicky Hager’s book Dirty Politics — remember his account of Cameron Slater sniffing around for ‘dirt’ on politicians and journalists, even asking a former prostitute friend to check with her mates working in brothels for salacious details? And Slater Jnr sending his apprentice Jordan Williams down to a pub in Wellington late at night on a wild goose chase – futilely looking to get a photo of a senior politician worse-for-wear? Pfft.

I reckon Dirty Politics just scratched the surface, and it sounds like this Cambridge Analytica crowd would fit right in.

There’s a lot notable in the video, including that line from Mark Turnbull about feeding weaponised information “into the bloodstream of the internet” – and doing it in such a way that it’s not recognised for what it is — and doesn’t trigger a reaction of: ‘That’s propaganda’.
Because the next question is, ‘Who put it out?’

As we’ve seen, there’s a lot of hidden action in this dirty politics/dirty PR/attack PR world.

Nice to have the lid lifted a bit.

This is worth a listen too:

Boy with all this FB/Cambridge Analytica stuff going down, the timing couldn’t be better to listen to @aleksk’s latest #digihuman episode about the vortex, 3rd person effect, & confirmation bias & hostile media. https://t.co/lxiCx2L6WA