Oh, Megyn Kelly now an even bigger target of Trumpkins

Well, this is a development …

Look at Newt Gingrich’s worldview. Trying to paint Fox News as ‘part of the establishment’ seems ludicrous, and even Kelly laughed that off. She did very well as he spun out.
But that was a terrible putdown of him at the end re working on his ‘anger issues’.

Judging from the outpouring of anti-Kelly sentiment following this interview, she’s not flavour of the month in the Trump camp any more. To say the least.

Update: And this, from The Daily Show, demonstrates very nicely the ‘What-you-see-depends-on-where-you-stand’ aspect of media criticism (to which none of us immune)… 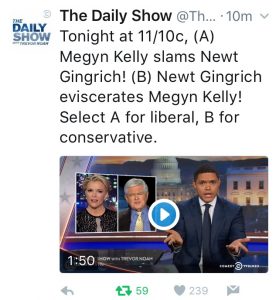 Lol. You have to laugh when realities collide.