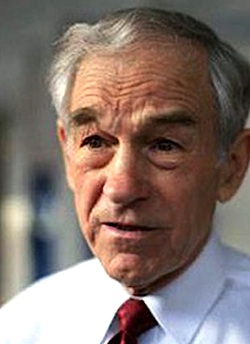 On the subject of US politics, this is who poormastery is supporting to be the next President:

I believe that Ron Paul was the only person who voted against the so-called “Patriot Act”. Ha. Love it.

Many of his views I disagree with, but he is the best Republican candidate – by miles.

“And I see in Paul none of the resentment that burns in Gingrich or the fakeness that defines Romney or the fascistic strains in Perry’s buffoonery. He has yet to show the Obama-derangement of his peers, even though he differs with him. He has now gone through two primary elections without compromising an inch of his character or his philosophy. This kind of rigidity has its flaws, but, in the context of the Newt Romney blur, it is refreshing. He would never take $1.8 million from Freddie Mac. He would never disown Reagan, as Romney once did. He would never speak of lynching Bernanke, as Perry threatened. When he answers a question, you can see that he is genuinely listening to it and responding – rather than searching, Bachmann-like, for the one-liner to rouse the base. He is, in other words, a decent fellow, and that’s an adjective I don’t use lightly. We need more decency among Republicans.”

Actually, I quite liked Sullivan’s closing parting shot as well:

Oh, and fuck you, Roger Ailes.”