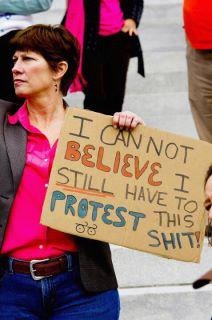 Hillary Clinton has fought for women’s rights around the world. But who would have dreamed that she would have to fight for them at home?

“Yes,” she continued to applause, “it is hard to believe that even here at home, we have to stand up for women’s rights and reject efforts to marginalize any one of us, because America needs to set an example for the entire world.” …

Dowd makes a case for a Hilary Clinton candidacy for US president in 2016.