« No Death Star under Obama
Too good! » 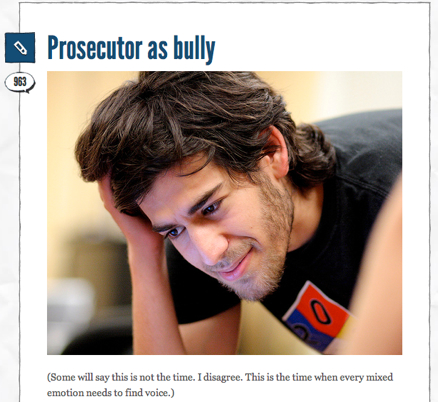 I’m so sorry to read of Aaron Swartz’s suicide. Whether you know his name or not, Aaron Swartz made an impact — a ‘dent’. If you don’t, and you’re interested, do some research. 1

I offer my sincere condolences to those who knew Aaron and loved him, and those who mourn his death now.

Naturally, rightly, now there’ll be an examination of sorts of the US Dept of Justice prosecution against Aaron Swartz — a prosecution ostensibly brought about by his [allegedly] downloading thousands (millions?) of journal articles from JSTOR.

Read Lawrence Lessig on that here: Prosecutor as bully

Given the inept (among other things) US prosecution/attempted extradition of Kim Dotcom from our own shores, as a New Zealander I can’t help but look at the prosecution of Aaron Swartz with a jaundiced eye. (There’s a succinct summary here from the NZ Herald‘s David Fisher: Dotcom comes out fighting.)

1 Perhaps start with this worthwhile obituary by Doc Searls: Losing Aaron Swartz with a good many links.

Update 1: Worth a read: The Truth about Aaron Swartz’s “Crime” by Alex Stamos