There’s consequences to that action … 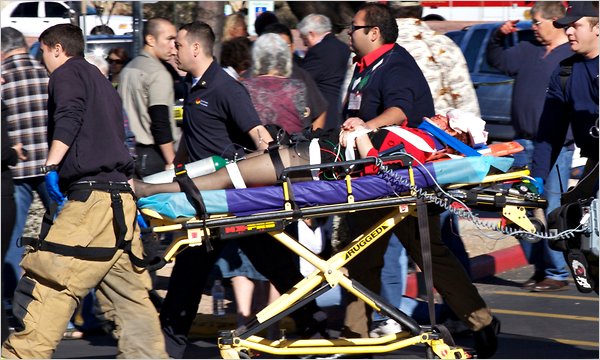 As I see it, Gabrielle Giffords (‘whom the authorities called the target of the attack‘) is a victim of the partisan climate of hate engendered by political differences and the hateful abuse by some Republican ‘leaders’ of their opponents (‘The Left’) as enemies — like, in war! Some use that rhetoric and emotional energy for electoral purposes. This isn’t the first and it won’t be the last time people get hurt by such cynical, thoughtless stridency.

From last year Rep. Giffords (D-AZ) responds to earlier vandalism incident at her office and being placed on Sarah Palin’s ‘crosshairs’ list.

“We’re on Sarah Palin’s targeted list. But the thing is the way that she has it depicted has the crosshairs of a gun site over our district. People do that they’ve got to realize there’s consequences to that action.” 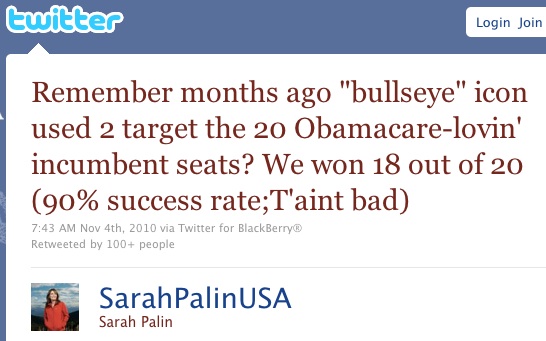 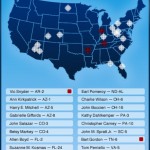 An aide to Sarah Palin claims the crosshairs depicted in her now-infamous target list of Democrats were not actually gun-sights, and that it’s “obscene” and “appalling” to blame Palin for the shooting.

“We never ever, ever intended it to be gun sights. It was simply cross-hairs like you’d see on maps,” said Rebecca Mansour on the Tammy Bruce radio show. Moreover, there was “nothing irresponsible” about the image, and to draw a line connecting Palin and Saturday’s shooting is “obscene” and “appalling.” […] Mansour called the crosshairs “surveyor marks.”

You know that Republicans will yell about the evils of partisanship whenever anyone tries to make a connection between the rhetoric of Beck, Limbaugh, etc. and the violence I fear we’re going to see in the months and years ahead. But violent acts are what happen when you create a climate of hate. And it’s long past time for the GOP’s leaders to take a stand against the hate-mongers.

Jon Stewart nailed it in his Rally to Restore Sanity speech. Check it out.

Thanks to John Gruber at DaringFireball