« What can he possibly mean?
The Band Played Waltzing Matilda »

I know that I criticize you and Fox News a lot, but only because you’re truly a terrible, cynical, disingenuous news organization. — Jon Stewart. 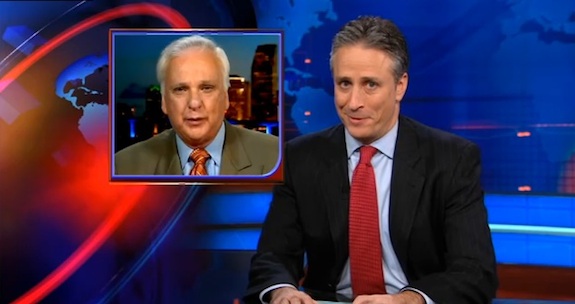 Jon Stewart apologizes for criticizing Bernie Goldberg and Fox News, but it's only because they're a terrible, cynical, disingenuous news organization. (click to watch at thedailyshow.com)

Calling Fox News ‘the lupus of news’ is a good crack. Stewart’s line about social commentary having always been the territory of comedy is undeniable, as is his comment: “I have not moved out of the comedian’s box into the news box. The news box is moving towards me.”

Read this article from Eric Burns, Media Matters for more, including this, which I agree with 100%:

Never in American history has a media organization this powerful been so willing to misrepresent reality in order to achieve a political goal.

And a very good article from the New York Times on the “devoted critic” status-reputation that Stewart is earning by paying attention to Fox News. Holding them accountable. (Reminds me of someone else around here. Nothing wrong with having an attention span as I have said before.)