For those of you who are ‘over’ the recent controversy about internet take-down orders and indefinite gagging of a blogger, you might want to skip this post. If you’re one of the parties involved, or close to them, please don’t put yourself in harm’s way or at risk of distress by reading on … 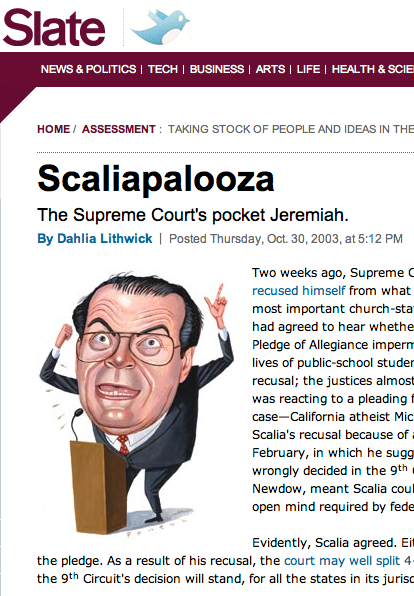 I wasn’t really aware of a toxic and dishonest internet sock-puppet who calls him/her/itself ‘Scalia’ until it published false statements about how things work here at The Paepae as if it had some inside knowledge.

As is my practice, I corrected the false information posted in a follow-up posting, but ‘Scalia’ just repeated the false statements.

I’ll explain why that interchange is noteworthy in a minute but, for reference, here’s what went down:

In the context of discussion about some of the implications of the recent court judgement I highlighted in this post Is this what we want? Internet ‘take down’ and indefinite gagging orders?, another blogger Lucia Maria at NZConservative, having read my summary, and (by the sounds of it) feeling queasy,  got a copy of the full judgement and read it…

Thanks, I’m reading it now.
I didn’t think it would be possible to be even more disturbed, but this judgement looks like it has effectively killed free speech in NZ.
It’s also very cursory in it’s treatment of the bank statement. The “how” of procurement is not considered important enough to be investigated – the only standard is the amount of distress that it caused and it’s link with a pattern of behaviour.
I’m quite horrified with what I’m reading, especially the bits about lawyers being a kind of protected species. Who knew? All those people making jokes about lawyers might need to be more careful in the future.

To which I said:

Yes, I found it chilling too, Lucia Maria.
Now, just as an exercise in imagination, pretend you were reading that judgement the *day after it was issued*, having been sent it directly by the successful applicant with a request that you ‘remove material’ from your blog.
Because that’s my context.
– P

And up popped a sock-puppet. ‘Scalia‘ purports to be a blogger, but a quick check of its ‘blog’ reveals a low level of activity — four posts since February 2011. (I’ll let you make your own judgements about their quality.)

‘Scalia’ stated (as if these were facts implying some inside knowledge):

The difference here of course Lucia Maria is that Peter Aranyi released from his moderation queue 3 separate comments written by [the blogger] stating that [the lawyer] is a [snip] and and that she, a barrister and solicitor, had [snip]. No attribution or link to any evidence. I saw the comments myself and I see them cited in the decision of the learned Judge. (excisions and emphasis added)

Which is untrue, as I explained:

Given your alleged concern for the applicant in this case, I’m surprised you would repeat the defamatory(?) remarks as you have. I don’t think she would thank you for that.
You’re incorrect in fact in your assertion “Peter Aranyi released from his moderation queue 3 separate comments written by…”
No, actually, anonymous Scalia, I didn’t. At that stage, as a commenter with more than one ‘approved’ comment on The Paepae, the blogger’s comments appeared without moderation. (You may see that as a fine distinction, but it is a distinction nonetheless.)

But anonymous Scalia repeated the false statements — bearing false witness — and, again, pretended to have inside knowledge:

There were 3 comments. Two about [snip], one about [snip]. I read them. Peter Aranyi moderates comments. The defamatory comments were queued in moderation, Peter Aranyi chose to release them from the queue. They stayed online and were only removed when the applicant complained for which we are all supposed to go boo hoo for Peter Aranyi and ignore the rest of the facts.

So, once again, faced with an anonymous sock-puppet making statements about me and my actions that I know to be untrue, I rebutted them:

Repeating it doesn’t make it true, anonymous Scalia. Those statements are not true. Ask the applicant.
When she telephoned me about the 8/7/12 comment (the one I described as ‘crossing the line’, I was away from my computer (at Auckland airport, in fact) and HAD NOT seen it. I was able to ‘unapprove’ it via the WordPress app on my phone shortly after her call.
On my return that afternoon I closed the comment stream, placing this note in the last comment (it’s still there):
Update: I’m CLOSING comments on this thread, and I’ve moderated a few (including my own) to avoid the law of unintended consequences. I said right at the beginning that I didn’t want to re-litigate the case here.
I’m sorry, it’s just gotten too blistering. Some commenters, including but not just Jacqueline, are swinging pretty heavy clubs and people’s reputations are being potentially affected and genuine ‘distress’ caused by unsubstantiated allegations. That’s not what this blog is about. Enough is enough.
Feel free to email me (address here) if you have any queries or concerns or if you want to comment to me directly. No-one has threatened me.
– Peter 8 July 2012
You and anonymous Scrubone malign and attack me as untruthful and a ‘hypocrite’ etc from behind your cowardly little pseudonyms. Don’t you realise your hateful behaviour is confirming the allegations against you?

The sock-puppet ‘Scalia’ is, in my opinion (and now my direct experience) a malicious liar — someone who bears false witness, and does so from behind a mask.

A web of deceit

I gave up wasting time trying to work out who sock-puppets are long ago, when I encountered them learning the ropes in my beloved PropertyTalk discussion forum. It’s not a good use of energy. What happens is that eventually they trip up and get exposed. (‘Whatever is whispered in secret will one day be shouted from the rooftops.’ Are we there yet?) 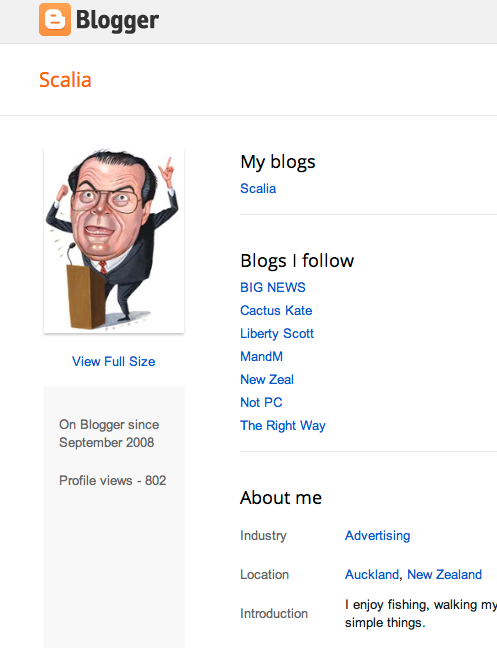 It’s pretty easy to pose as someone else on the internet. That’s why so many malicious liars do it, I guess.

But it can be interesting to see the effort they go to, to weave their deceitful web.

The cartoon the ‘Scalia’ sock-puppet uses as its avatar is from a 2003 Slate.com article about US Supreme Court Justice Antonin Scalia (above right).

Here’s its Blogger profile. As noted, the ‘blog’ isn’t very substantial. It seems to me the ‘Scalia’ sock-puppet is mainly operated to post nasty attacks on other people the hand-in-the-sock doesn’t agree with. Last week it was me and Lucia Maria, for the last few years it’s been the blogger at the centre of these court cases.

That fake Blogger profile reminds me of the much-more convincing fake Google Plus profile of a commenter here last year — ‘Cally’ — who popped up to pseudonymously smear the blogger in this case and chastise me as one-sided and unfair.

‘Cally’ was exposed as a sock-puppet, coincidentally, in the discussion thread of my post Declaring where you’re coming from, when ‘she’ flicked me a link to ‘her’ Google profile, and it turned out ‘she’ had used a commercial stock photo as ‘her’ profile pic. 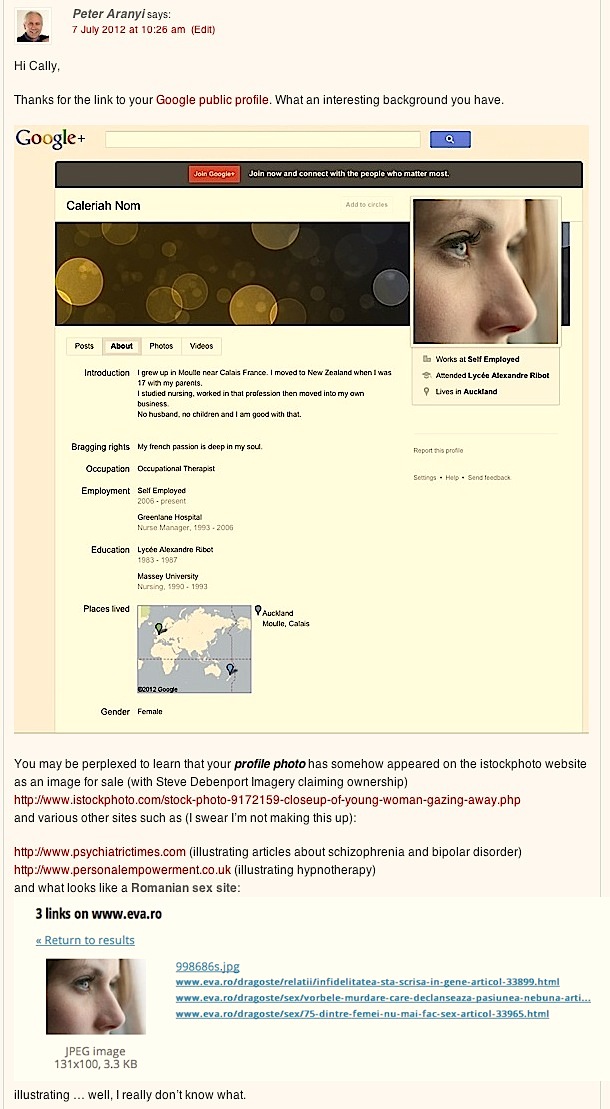 So the malicious sock-puppet Scalia is just another phoney person as far as I am concerned.

Sock-puppet Scalia is deceiver — affecting to possess ‘insider knowledge’ about me and my website that it does not have, sock-puppet Scalia has made misleading statements about me, my decisions, and my actions.

And sock-puppet Scalia is also one of those who has and does send goading, harassing and abusive messages and comments to the blogger at the centre of these court judgements. (See my comments about ‘subterranean’ actions in this comment about how the ‘war’ against the blogger has been waged by people like sock-puppet Scalia.)

While supposedly complaining about cyber-bullying and character assassination, from behind a pseudonym with no accountability (or so it thinks) sock-puppet Scalia posts nasty, bullying messages publicly using its targets’ names, as if trying to feed Search engines malign, anonymous falsehoods and exposing its puppet-master’s hate.