A sharp foil is a wonderful thing

I am reading and SO enjoying Your Movie Sucks, a collection of reviews by Roger Ebert. My goodness, he’s got the skills. Wonderful. 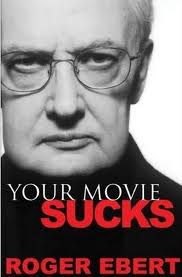 A review of the collection over at Blogcritics includes this line:

Like most critics, these negative reviews are an outlet for the creative side of Ebert’s writing to shine.

That’s well said.  Yes, there’s something about choosing a clean way to express a negative opinion that stimulates a critic’s imagination. I wish I were as good a writer as Ebert. I guess I’ll just keep practising.

Hook this book out and give it a read. There’s something for everyone, as the saying goes.

It’s worth it just for his slam-down of Rob Schneider:

Reading this [a full page ad by Schneider castigating a critic who dared pan Deuce Bigalow: European Gigolo] I was about to observe that  Schneider can dish it out but he can’t take it. Then I found he’s not so good at dishing it out either. [Comment: Zing!] I went online and found that Patrick Goldstein [who Schneider had declared in his ad had ‘won absolutely nothing’ in the way of awards for journalism, and not a Pulitzer Prize, implying that thus he was unqualified to criticise the film] has won a National Headliner Award, a Los Angeles Press Club Award, a RockCrtiics.com award and the Publicists’ Guild award for lifetime achievement.

Schneider was nominated for a 2000 Razzie Award for Worst Supporting Actor, but lost to Jar-Jar Binks. … As chance would have it, I have won the Pulitzer Price, and so I am qualified. Speaking in my official capacity as a Pulitzer Price winner, Mr Schneider, your movie sucks.