« Privacy? Not if you use Gmail
Hansard can be a real bitch, eh Mr Key? »

A character reference for Trevor Mallard that I find more plausible

Long-serving Labour MP Trevor Mallard cops a fair bit of hateful abuse from the attack dogs in the NZ political blogosphere. He’s routinely denigrated and slandered by people with an obvious axe to grind — partisan political activists. You know the type. 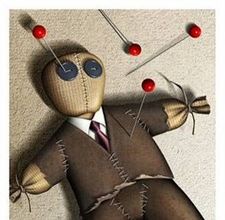 When a political opponent becomes an irrational figure of hate, it starts to make the haters look crazy. (image: ehow.com)

As a point man in the Labour Party he’s obviously a target for outpourings of bile and spite … whatever the social media equivalent is of voodoo … obsessive incantations, writing and sticking pins into a wax doll.

Yeah sure, Mallard has been a knee-capper and a bovver boy … and engaged in pretty feral debate himself. I actually liked him for having a poke at the goading Tau Henare (who I think admitted he deserved it?), but yeah, OK, it wasn’t very ‘Parliamentary’. So sue him. (Oh, wait.)

As I see it, Mallard cops flak from haters and nutters simply for being part of Labour’s online presence and for having the guts to poke his oar in — sometimes controversially. He recently advanced a conspiracy theory about politics lecturer Bryce Edwards’s sponsorship for his daily political digest. Earlier this year he suggested Hawkes Bay’s answer to Machiavelli Simon Lusk and Pakuranga’s answer to Perez Hilton Cameron Slater acted as (paid) political advocates/operatives for the National Party (Brash-Banks) takeover of the dying swan melodrama formerly known as the ACT party. (Cam denies any payment.)

Trevor Mallard is out there. The blogosphere’s sad standard response: ‘Meet argument/opposition with personal abuse’ has kicked into overdrive on him. Reptilian spite and vitriol dog him as people who fancy themselves as his political ‘enemies’ — legends in their own lunch boxes, or anonymous trolls, most of them — have a crack at him. Usually the attacks are graceless, baseless, nasty and barely articulate.

Mallard, although passionate at times (isn’t that better than bland?) always seemed like a fairly well-rounded human being to me, despite being the focus of ongoing character assassination from ‘the Right’ and the fringe-dwellers.

So I nodded in agreement when I spotted this quote from Derek Cheng’s profile of outgoing National Justice minister Simon Power in the NZ Herald:

“People see a clash of parties, but they don’t see the trust between selected individuals on both sides. Each political party can carry one or two people who can talk to other parties in a very honest and straight-forward way.
“[Labour’s shadow Leader of the House] Trevor Mallard and I disagree on a lot, but he’s never broken his word to me, he’s never broken my confidence, and when I’ve dealt with him and he says Labour is going to do something, they do it.”

Yeah, that’s the picture I have of Trevor Mallard too. ‘Sportsmanship and well-rounded humanity‘ I called it.