Words that may not be spoken

Last week I wrote to the local Howick & Pakuranga Times about a long-running local issue of importance to me and my family. I was intrigued by some of the deletions and alterations in the resulting published Letter to the editor.
See what you think: 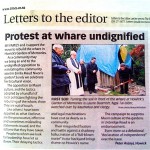 My family and I fully support the moves to rebuild the whare in the Garden of Memories.
As a community may we, at long last, bring an end to the undignified and, by all appearances, racist opposition to the reinstatement of this community asset in Emilia Maud Nixon’s garden? Surely we can Can we celebrate her bi-cultural vision? Surely.
The opposition to Maori culture in our suburb, and the tactics adopted by a handful of local politicians — fighting the rebuilding of the whare — shows they’re out of touch. Of course they deny it’s racism, but [L]ike others, I have been appalled at what I believe are the provocative, offensive and sometimes misleading statements issued … and actions they have taken.
Men and women to whom we look for leadership have let us down. Their delaying tactics and subversive legal machinations have cost us dearly as a community. Their misguided fixation and battle against a shadowy hallucination of a ‘full-blown marae’ in our back yard brings shame on Howick’s the name of Howick.
The campaign to suppress Maori culture at the gardens in Uxbridge Road is an embarrassment. (Even more so a delusional ‘declaration of independence’ over the issue.)
We all look like racists as a result.
Peter Aranyi, Howick

Interesting, huh? I have no real complaints. It’s their paper, and the editor (rightly) has the last say about what appears in it — good on them for publishing the letter and the ongoing ‘debate’.

It’s illuminating to see what comments are, apparently, beyond the pale for that Letters to the editor forum.
Encouragement - Writing/Publishing
Howick, racism, Torere