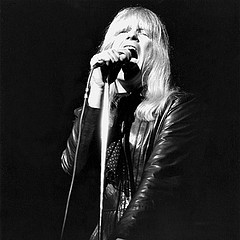 Larry Norman‘s name came up on one of my friends’ Facebook walls last night … I loved what this musician gave as his gifts — and his influence. He was a cool cat with great intelligence and, it seemed to me, a sense of mission and virtue. He was a gutsy individualist, a trailblazer as others have noted.

This is what I wrote on FB:

It was a privilege to work with Christian Birch to promote Larry (all in black) Norman on one of his NZ tours… My friend Murray Broom and I got to hang out with him quite a bit because we organised the logistics etc. of his Wellington concert
Larry gave me a whole new perspective on music royalties when he ‘grabbed the bag’ from our sales of his LPs (yes, vinyl) citing the lack of a licence agreement for NZ. The guys at Word Records in Levin — whose stock they were— were NOT impressed, but were ultimately very gracious to us.

I remember we talked about many things. Some of which, like his courageous example, are still with me.

I liked this song ‘Watch what you’re doing’, in the spirit of ‘Why should the devil have all the good music?’ …