« Politicians and the media
The business of selling words » 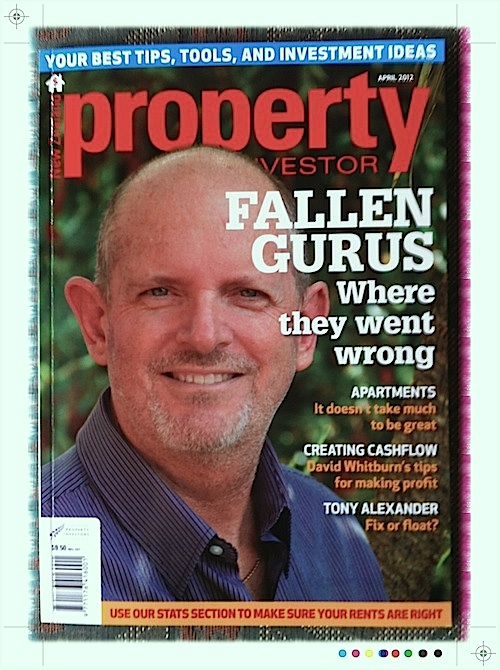 Spruiker Dean Letfus is a personable chap who used his communication skills to get people to take his advice, and buy whatever he was selling. It didn't always work out well for them. But nobody's perfect, right?

I hadn’t seen this until today — a remarkably positive article about investment ‘lessons’ spruiker Dean Letfus has learned from the collapse of his ‘property empire’ in April’s New Zealand Property Investor magazine.

A few other bankrupt investors are mentioned to leaven the loaf, but in the main it reads like an article about cover boy Dean Letfus, the former (and current) property spruiker and internet guru talking about what he did right and his ‘innate ability to negotiate’ before the wheels came off.

It quotes him in such gems as:

Letfus knows that his success could have continued unabated if the market had stayed buoyant: ‘Everything I did worked, I just did too much high-risk stuff at the beginning of an unprecedented recession.’

and some of the events and people documented on The Paepae (use the tags below if you want to know more) are also mentioned, tangentially:

“As an educator and professional investor [comment: never stop promoting, huh?] I have always taken my business very seriously,” Letfus says. “When the world started imploding I started looking for cashflow solutions outside my own skill set. I felt like I had to fix not just myself, but hundreds of clients as well. So in my enthusiasm/desperation I connected with people that I shouldn’t have and got involved in businesses I didn’t know enough about. In my case this culminated in … a business partner who took advantage of me, my clients and then vanished overseas … Huge damage was done to me and my friends, including the destruction of my New Zealand business.” (ellipses and punctuation in original — interviewed by email?)

Oh dear me. For those of who observed the methods Dean Leftus and his accomplices used operating his New Zealand businesses, selling get-rich-quick schemes like ‘Conquer Australia’, and his mate Matthew Gilligan’s subdivision sites, not to mention his local and overseas selling trips as, first a property guru, then suddenly an internet marketing expert, perhaps the cessation of those activities wasn’t a totally bad thing?

I’ve had correspondence from people who now put Dean firmly in the same category that he’s now apparently classing his former business partner Shaun Stenning: ‘I connected with people that I shouldn’t have’. Oh yes, that’s how some people feel about Dean, believe me.

If you’re interested, scope out the April 2012 issue of the magazine.