« What a great title! How to Smell a Rat
Yeah, why not have a sense of humour? »

In a case of ‘sometimes if you don’t laugh, you’ll cry’, from The Spruiker’s Lament …

At the time I hadn’t seen Anderson Cooper’s The Ridiculist (“a new hypocrisy-exposing segment on CNN’s Anderson Cooper 360“) … but I like it. And I like his sane, calm and sensible approach.* 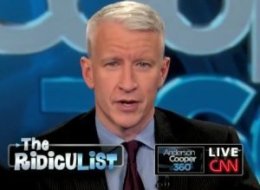 It’s tough being hassled or mocked for one’s foibles, blunders, mis-steps and blind spots. Even worse, for our consistent questionable behaviour. We’re each of us thin-skinned about something.

So sometimes the hardest thing is to respond to someone shining a spotlight on us (or casting our actions in a negative light) by asking: ‘Gee, have they got a point? Can my actions be fairly seen that way?’

It’s also super-easy to jump to conclusions about someone we see as ‘opposing’ us, or our ideas. It’s easy to ‘make the critic wrong’, or to characterise them as ‘only saying that’ because they’re on the other team (or the ‘out group’, as we discussed in the origins of conflict).

We’ve seen that the only real pre-requisite for conflict — sometimes enmity — is to have an ‘us’ and a ‘them’. This, I suggest, comes from our tribal nature as humans (but I’m no expert).

This feeling of estrangement from/towards others can be amplified by their overt criticism of our actions. For instance, my ongoing ruminations and reflections about the marketing methods of certain spruikers discussed now and then here at thePaepae.com and elsewhere have created some ill-will towards me. That’s understandable.

From what some of my ‘targets’ have communicated about that experience (through blogs, forum posts, email and [ahem] phone calls to me), it must be bewildering and frustrating for them to cop it like this from, um, lil ol’ me. In casting around for explanations, they seem to me to far too readily grasp for an easy projection of implicitly unfair ‘competitive bashing’ or that I’m driven by a ‘commercial vendetta’ motivation — inaccurately, in my view. That ain’t it, fellas. Sorry. I’m just calling it like I see it.

As I said as part of another conversation about smearing the messenger:

We all hate criticism — the trouble is,
sometimes we deserve it.

* See Anderson Cooper’s take on ‘Pizza Girl’ below the fold. Nice. Lessons for all of us, I think.