« Just because it is brilliant …
Great headline: Do Narcissists Know They Are Narcissists? » 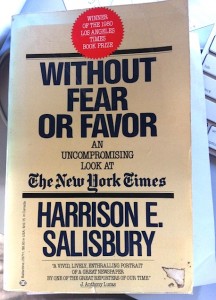 After my comments this week about the usefulness for ‘new media’ operators to have or develop a ‘traditional’ media sensibility, I pulled out my copy of Salisbury’s Without Fear or Favor and reacquainted myself with this great book about the NY Times. It’s like everything: Where you put your focus is where you produce your results.

This passage below, about the goings-on around news coverage of the Watergate break-in and the subsequent scandal which eventually brought down Richard Nixon, exposing him and his henchmen as filthy liars, touches on a principle …

Of all the stories put together by the young reporters [The Washington Post’s Woodward and Bernstein] this was the only one to misfire seriously and it misfired on a technicality, not on its essential truth.
But Frankel had touched a critical point. Times’ style and Times’ tradition did create difficulties. It is in the nature of investigative reporting that the reporter often learns more than he is able to attribute to quotable sources. People tell him things that they do not wish traced back. The reporter can put two and two together but he cannot spell out the arithmetic in his story. Times editors and copyreaders worried about such stories, sometimes rejected them, often held them up for rechecking and rewriting. (The same thing, of course, happened at the Post.)
Then there was a question of psychology. One editor who worked at that time in both Washington and New York was convinced that “nobody really thought it was story — just a cheap low-level crime of some kind. There was no perception in either Washington or New York of what it added up to.”

I don’t mean to come on all coy and mysterious, but there are things that I am told, and documents I am sent that enable me to ‘know’ stuff that I can’t elaborate on here. For good reasons. (Some of my coverage of odious spruikers and their confederates, for instance.) It’s the same with every journalist. That’s why sometimes you’ll read a story that seems disrespectful or harsh in ‘tone’ but doesn’t necessarily spell out all the facts to justify such treatment. (The ‘arithmetic’, in Salisbury’s parlance.)

Of course, the dark side of that is that sometimes a journo is ‘spun’ by a source — i.e. they’re fed a line of plausible bullshit in an attempt to manipulate the story. It is pretty awful realizing you’ve been used by someone who wanted to turn you into a (mis)guided missile. Or if you’ve backed off an angle in a story, or gone easy on a ‘player’ because they gamed you with a (false) tale of woe … It’s consciousness-expanding when it happens and just adds to the cynicism which the job already engenders.

Some users sell you a sob story that makes you feel sorry for them … trying to tell you it’s not their deliberate actions or greed or innate ‘cookedness’ that got them (or their victims) into the sad situation. Some of them, being effectively con men, are very good at spinning that line.

We learn to make judgements and look for independent corroboration.
Anyway, just some thoughts.

PS, all that said, as we discussed earlier, it’s still important — for credibility — to link to sources as much as possible. That’s the game: proving assertions and facts.