« Snakes alive!
A subliminal message to ‘investors’ getting ‘educated’ [groan] about distressed US properties » 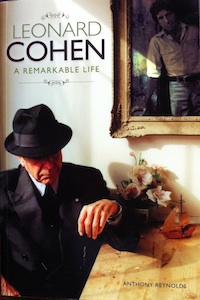 A must for any serious fan of Leonard Cohen

A dear friend gave me this terrific book for Christmas. I love and am inspired, challenged, chastened — simply moved by Leonard Cohen. (‘I know his melancholy is your joy, Peter, but can we change the music please?’ my beloved wife said to me once.)

The book is a must-have for serious Cohen fans (and it’s a great read!) It’s a detailed, insightful biography and Anthony Reynolds’ sources seem pretty good. Several of Cohen’s long-term collaborators (including players on his recent ‘never ending’ world tour, which I caught in Monteal and Wellington. Wow) have contributed, but the book is not a hagiography. Well worth reading.

The proofing is shocking — some real howlers (vacation for vocation, words missing, someone whose name slides from Anne to Ann to Anna within two pages) but the thoroughness of his narrative and the just plain ‘interestingness’ of the content more than makes up for it.

One quote worth mentioning (and Reynolds has gone to great and effective effort to give the book a rich texture with direct quotes and quotes from other sources) reminded me of Hunter S. Thompson’s damnation of the music industry as ‘a cruel and shallow money trench…’ (which I quoted relating to Gin Wigmore recently):

The record business is not filled with wonderful people.
The business itself is pretty sllmy, pretty cutthroat. The making of records is a wonderful art but the business is awful, run by lawyers …
— Record producer John Lissaur quoted in Leonard Cohen – A remarkable life by Anthony Reynolds.