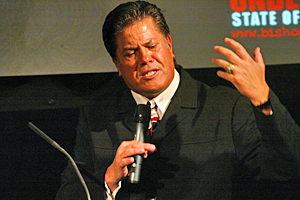 The Destiny Church's covenant demands total support for their 'spiritual father' Brian Tamaki - even when he makes a mistake. (image: Hawkes Bay Today)

Meanwhile in the US:

Follow up article on Paul Haggis’ defection from Scientology (politicsdaily.com)

When the Haggis letter emerged, Davis responded quickly and strenuously, telling the Associated Press that the church does not mandate “disconnection” for anyone and that such a break is a completely “self-determined decision.” (Regarding the Prop. 8 question, Davis’ comment was more vague: he didn’t say whether or not the church supported or opposed the measure: “We’re all for civil rights and the rights of minorities,” Davis told the AP. “We know what it is to be a minority and have your rights curtailed. We’re very vocal and consistent in our stance on discrimination against anybody. We take it very seriously.”)

Is this revelation, then, conclusive proof that Scientology is the cult that many claim? It all depends on what is meant by “cult.”

The word really has two meanings. One is the original sense of any regular practice of faith and body of beliefs. But since the middle of the last century and the rise of what are now generically termed “New Religious Movements,” or NRMs — such as Scientology — the word “cult” has been used as a pejorative label slapped on anything that seemed odd or evil. (Or from California.)

Charles Manson’s cabal was called a cult, as were the followers of Jim Jones, who committed mass suicide at their community in Guyana in 1978. The Branch Davidians, led by David Koresh, who perished in an FBI siege in Waco in 1993 were considered a cult, as is the Fundamentalist Church of Jesus Christ of Latter Day Saints (FLDS) led by the now-jailed Warren Jeffs, who promoted polygamy and sex with underage girls.

Given such associations, it’s no surprise that no one wants to be known as a cult, and that the term has become so loaded that experts in religion caution against using it. So is there any such thing as a cult? The commonly accepted definition of a cult today is anything that is “weird” or new or well out of the mainstream. (Scientology claims 10 million members worldwide. Others say the global figure is closer to 100,000, and a large-scale national survey in 2001 put the number of U.S. followers at 55,000.)