« Essential viewing — Nelson Mandela on Yasser Arafat: Your enemies are not automatically our enemies.
On one hand we complain about surveillance … »

Internet marketing cowboys will be with us always

The Atlantic has a must-read article on an internet marketing cowboy and [alleged] hustler and con-artist called Jesse Willms. It’s a longish read but a very good one. 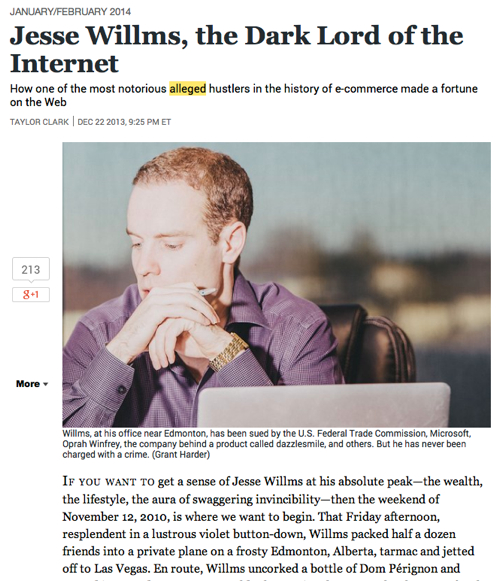 Nice use of ‘alleged’. Click to read Taylor Clark’s informative and sobering article about Jesse Willms at THE ATLANTIC

Reading about Willms, I saw some similarities in the story of motormouth Shaun Stenning, a figure in various failed internet marketing enterprises Geekversity, Twalk, Snipr, YouTube Traffic Thieves, NZ Property Guru’s (sic) etc. who we discussed here. (The post ‘Is this how Shaun Stenning handles a request for a refund?‘ is still the most-commented article on The Paepae.)

Among the similarities was starting young, extensive use of hyperbole and deceit, and choosing what ‘lesson’ one takes out of a major business failure due to ethical lapses:

After Microsoft crushed his company, Willms sifted a valuable lesson from the remains. The lesson was not in what he’d done wrong, but in what he’d done right: a person, he now knew, could make a hell of a lot of money selling products without ever coming within 1,000 miles of them.

This paragraph sounds a touch too… admiring, but it makes a point about how characters like this build their ‘skills’:

When we use the term con artist, we typically place the emphasis on the first word while forgetting the implications of the second: that there is, after all, a real art to fleecing people. And no matter whether you believe Willms deserves a marble bust in the scamming pantheon, there is little question that he was something of a virtuoso—a Web wunderkind. By the time he’d built and lost his first fortune, Willms was still just a teenager, but the experience taught him something important: what it would take to really make a killing on the Internet.

Go and read Taylor Clark’s article at The Atlantic and know that these characters rival cockroaches for survival skills. Of note was the deployment of loud charitable giving as image-enhancing ‘…Willms began donating money “to not look like the bad guy all the time”… ‘ That reminds me of another spruiker I encountered who tried to cover up his reptilian ways with well-publicised ‘support’ for ‘worthy causes’. {retch} 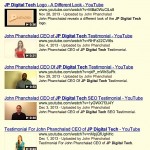 Shaun Stenning has, apparently, used the ancient tactic of taking his spouse’s name to conceal/compensate for his own impaired track record and ‘rebranded’ himself as John Panchalad and JP Digital Tech, selling (you guessed it) internet marketing ‘services’ among other things … with a good dose of ‘personal testimonials’ from ‘satisfied clients’ (right).

But taking a leaf from Shaun Stenning’s own book,* it appears some of Stenning/Panchalad’s dissatisfied customers have set up an attack/exposé website — http://johnphanchalad.net.

One of the (anonymous) organisers of the site wrote to me:

We’re actually a group of people who had been scammed by Stenning, the purpose behind our website is to inform people that Stenning is still at large. Our goal is to prevent more victims to Stenning’s scam program. We’re not looking to gain any financial benefit by establishing johnphanchalad.net, for anyone who wants to know more about Stenning’s latest activity, please visit our site, and feel free to spread the world.

‘Reputation management’ is a growth industry, isn’t it? ‘There’s gold in them thar hills!’