« Smoke gets in your eyes, Carrick?
The escape of exnzpat, Part 7 »

Capital Gains Tax: ‘Politics is the art of polarization’

The NZ Labour Party has (deliberately) let the cat out of the bag with its ‘soft launch’ confirmation that a Capital Gains Tax in some form will be part of its election policy for November 2011. 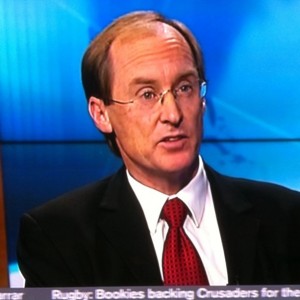 Cue the scary music!  And the completely predictable howls of outrage (some justified) with cries of ‘unfair’, ‘inconsistent’, ‘distortionary’, ‘complicated’ and ‘this-will-only-make-the-tax-practitioners-rich’. Yada, yada, blah, blah…

Also cue the lip-smacking of Labour’s opponents on the right, whose political philosophy has kept NZ the largely unregulated (read: ‘ripe for pillage’) wild-west ‘free market’ (cough) low-decile country that we are, compared to Australia while aspiring to some sort of free market ‘puritanism’, even at our own expense.

Cue also the equally reflexive ‘thump the rich’ cock-a-doodle-dooo! from those who think (falsely, in my view) that it’s about time the country’s property investors ‘paid their share’ and that property speculators (said in the same tones as ‘scum sucking bottom feeders’) are taxed on their profits (if they make any, from that risky venture). 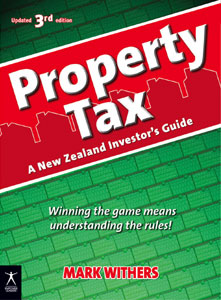 As the editor and publisher of Mark Withers’ Property Tax – A New Zealand Investor’s Guide (4th edition being prepared now) and Tony Steindle’s Property Law  – A New Zealand Investor’s Guide you might think I’d have welcomed the last few years of uncertainty and upheaval in our tax system — landmark changes to the taxation treatment of real estate investment, and wider changes affecting every taxpayer. Um, no, not really.

I actually have some sympathy for the point of view that the uncertainty now sparked by Labour’s CGT policy-in-embryo is good news for the accountants and ‘legal structure specialists’ … but for most investors it’ll just mean more time, money and energy spent on visits to those accountants and lawyers — just as some are getting their head around the demise of their Loss Attributing Qualifying Companies. It’s been a big few years and some of us are feeling a bit punch drunk.

Labour’s political opponents, and some in the media (same thing?) are already feeling galvanised by (at last!) having a simpleton’s ‘point of difference’ to hammer emphasise between the pretty much tweedledum and tweedledee two main parties. National under Key has cuddled so close to Labour for sound reasons  of electoral popularity — ‘Labour Lite’ was a nickname for the Nats making the rounds awhile — that Labour really had nowhere to go but left. Quite correct.

As I see it, Don Brash was perceived as too dry for the electorate, as well as a little accident-prone, and the Nats’ decision to throw him under a bus to make room for ‘the smiling assassin’ John Key was a great move politically. For it’s clear the Nats’ virtually unquestioned acceptance of ‘nanny state’ socialism (finance company bailouts, earthquake relief, borrowing $300m a week etc) — despite the obvious ‘philosophical issues’ — is merely meeting the electorate’s expectations. That’s what mainstream NZ’ers want. The tinkering around the edges like state asset sales, whacking the ‘undeserving’ poor, and competition for ACC etc is mere wallpaper.

The mainstream, as an electorate, has learned to be suspicious of radical reform. Our ‘smile and wave’ prime minister seems to understand that. ‘Don’t frighten the horses’ has become part of National’s DNA. Survival of the flexible.

Labour/Phil Goff’s [cliché alert:] ‘desperate roll of the dice’ or ‘return to its roots’ (depending on your POV) has put some spring in their step — and their opponents’ step. An election is always more fun if it’s a contest.  Labour’s finance spokesman David Cunnliffe and aspiring servant-of-the-people Cathy (Cactus Kate) Odgers agree:  “It’s game on!”

The proposed tax is actually a PR and electioneering gift to right wingers, and great for fundraising. We all need a purpose in life. Something to ‘oppose’ fits in nicely as a substitute in the meantime.

So what about CGT? Well, I’m not an expert, but we’re an oddity in the OECD, the boffins tell us, not having any form of capital gains tax. So seriously, how long can that last? Right now our greased-up politicians are shimmying through a pole dance (sorry, awful image) to cement ‘free trade’ agreements hither and yon … From the minimal detail of the policy available now (leaks and speculation), it seems Labour’s CGT proposal is predicated on applying only to ‘investment property’ and ‘baches’ and only levied on sale. Not the ‘family home’. Breathe.

That won’t bother a lot of people, in practice, but it will fire up the ‘money-grubbing socialist’ vs ‘eat the rich’ debate nicely. The same why-think-when-you-can-hurl-slogans?-style debate is part of the polarized political debate all over the world. See this ‘front page’ on The Huffington Post today. (Hint: it’s NOT a story about Labour’s proposed capital gains tax.) 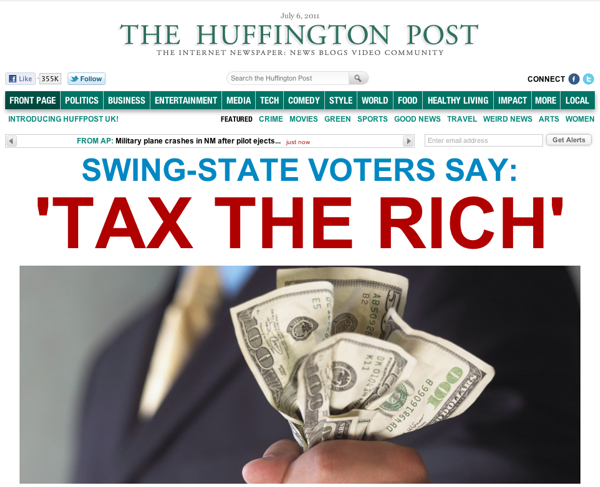 NZ Property Investors Federation president Andrew King, who’s been lobbying/educating Ministers of Housing and other politicians of all stripes about the reality of life as a property investor for many years, told TVNZ7 he doesn’t think the policy will ever be introduced, as well as predictably running through all the reasons he says it’s a bad idea.

For Labour, they surely know there’s no reward without risk. Fair enough. But the risk they face is that working-class people aspiring to be ‘rich’ will in some cases, reflexively move towards the Tories — perceived as the ‘party of enterprise’. People planning to ‘move into property’ themselves in the future, may respond in a reptilian fashion to the idea of a tax on their hoped-for capital gains. That idea has more immediate impact than selling our airports.

I guess we’ll find out.

PS The ‘Politics is the art of polarization’ is a quote from former Nixon henchman/Assistant to the President for Domestic Affairs John Erlichmann. [Don’t hate me because I’m eclectic.]